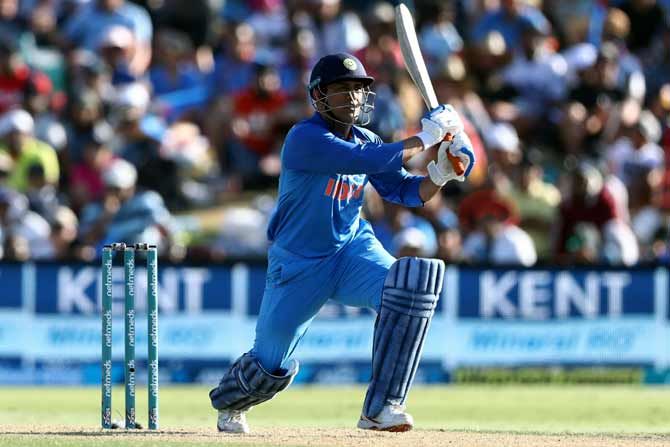 It's already the stuff of Bollywood legend but Mahendra Singh Dhoni clearly believes there's a sequel in the making this summer.

The movie that tells the story of his rise from humble beginnings in Ranchi to lifting the ICC World Cup on home soil eight years ago is one of those rare things, a sports film worth watching and then watching again.

And while his 91-run contribution and match-winning six in that final will forever define him, helping India to success this summer would be quite some tale too.

As Dhoni smashed a straight six down the ground to bring up a 73-ball century in India's final warm-up match against Bangladesh in Cardiff, his name was chanted by a vocal crowd of idolising fans.

And it was certainly hard to think some had been questioning his place in India's 15-strong team. 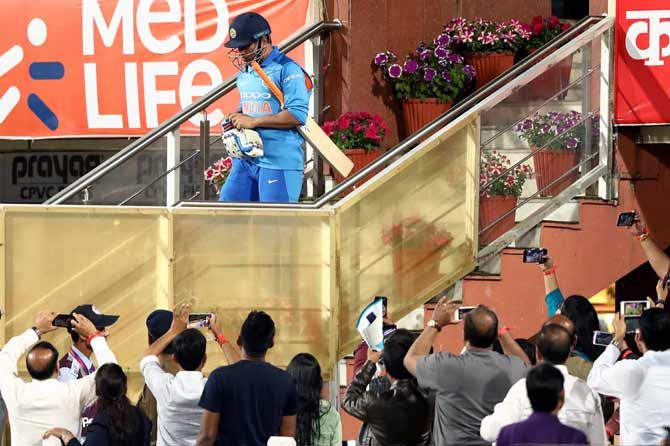 IMAGE: Mahendra Singh Dhoni sparked speculation of life away from the sport earlier this year when he posted a video on social media that discussed his love for painting. Photograph: Robert Cianflone/Getty Images

And his innings in Cardiff was more of the same, few other players can pull the trigger so effortlessly, Bangladesh's spinners reeling under the relentless barrage.

KL Rahul came into the match with Bangladesh knowing he needed runs to stand a chance of cementing his place at No 4 in India's line-up.

They were 102-4 when Dhoni walked to the crease but together they put on 164 runs, Dhoni's presence seeming to calm to the younger man, who also bagged a century.

"We didn't talk too much because we both had our individual plans," said Rahul.

"Batting with him is always a dream for me. I have been lucky we have been able to share a few big partnerships over the years. IMAGE: Virat Kohli might be the captain but his leadership is strengthened by having Mahendra Singh Dhoni close by. Photograph: Robert Cianflone/Getty Images

Dhoni sparked speculation of life away from the sport earlier this year when he posted a video on social media that discussed his love for painting.

However, there are not many players who can create such vivid shapes with the bat and bring such colour to the big stage.

His role, according the 2011 World Cup winner Suresh Raina, is to be 'captain of captains', giving confidence to those around him by the sheer weight of his presence.

"For me he is always going to be my captain because I started my career under him," said Kohli, after his appointment in January 2017. "I couldn't be more lucky to still have him around for ideas."

Kuldeep Yadav has already spoken of Dhoni being the man in the changing room who ‘knows the answer for everything’.

"Dhoni gives us freedom and Kohli boosts our confidence, they are our backbone," he said.