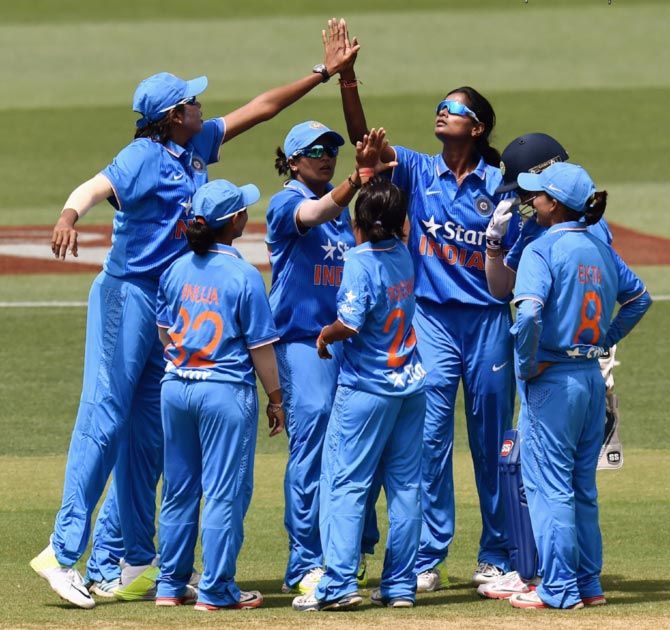 Ecstatic with the women's cricket team's historic series triumph over Australia, men's fielding coach R Sridhar has sought to claim a bit of credit for it, saying that pep talks from him and the likes of M S Dhoni might have contributed to the aggressive approach that Mithali Raj and Co. displayed.

On Sunday, the Indian eves wrapped up the Twenty20 series against Australia 2-1. The visitors had won the first two matches of the series before going down in the last match in Sydney.

Sridhar said the girls played fearlessly, after advice from him and the men's team members in a chance meeting in Adelaide and Melbourne.

"It was nice to bump into the Indian women's team at Adelaide before the first T20I. I know the girls well from my tenure at the NCA and we have helped them in a few camps," Sridhar told bcci.tv.

"Based on my experience, when we were here for four and a half months last year, especially spending a lot of time in Adelaide, all I told them was -- 'These are one of the best batting wickets around the country and chasing a score will be a very good option.

The woman team's met the male counterparts in Melbourne after staying back to watch their match.

"The very fact that captain MS Dhoni, Virat Kohli, Harbhajan Singh, Ajinkya Rahane and a few other boys went and met the girls at the ground shows that the men's team takes equal interest in the women's game," Sridhar said.

"Someone like a Dhoni and Virat going and having a word with them is huge and is a great confidence booster for the women's team. Such things I believe will give them wings. This series win should do them a world of good and hopefully they take this momentum forward. We as a team are always there to help them. We want to see them stand on that podium with the trophy on the 3rd of April."

Sridhar said he followed the women's series on TV and was bowled over by the performance of the side.

"There is no point in playing conservative or cautious cricket against them. You have to play courageous cricket. That is the way they play their cricket and you have to play the same level of cricket to beat them.

"If they take one foot forward, we should take two steps forward. It is a country where you take the bull by its horns. This is what we told them and if it has helped them, I am very happy about it," Sridhar said.