Dhoni criticised for 'baffling' innings but gets Kohli's backing 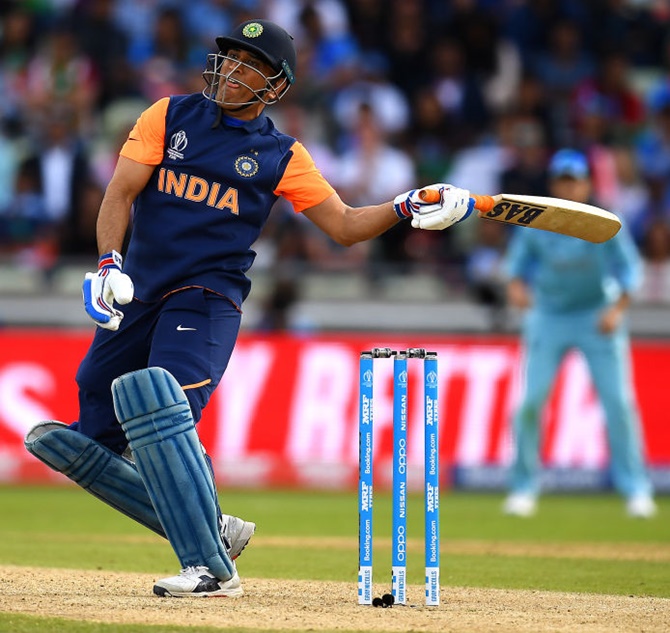 Former cricketers came down heavily on Mahendra Singh Dhoni for his 'baffling innings' during India's maiden defeat in the ongoing World Cup to England but the veteran wicketkeeper-batsman continued to get the backing of skipper Virat Kohli.

Former India skipper Sourav Ganguly, who was doing commentary during the match, questioned the batting approach.

"I don't have an explanation for that...I can't explain these singles. It's also the length and the bounce that has deceived the Indian batsmen. You can't be chasing 338 and still have five wickets in the end," Ganguly said

"It's about mindset and the way you look at the game. The message had to be clear: no matter where it comes and no matter where the ball lands you have to find the boundary," he added.

After the departure of young Rishabh Pant (32) and Hardik Pandya (45), India needed 71 runs from the last five overs. All eyes were on Dhoni, known to be one of the best finishers of the game, and Kedar Jadhav but they couldn't pull it off for the side.

Despite the criticism, Kohli was steadfast in his defence of Dhoni and said the wicket got slower towards the end of the game which made big shots quite difficult.

"I think MS was trying really hard to get the boundary but it wasn't coming off. They bowled in good areas and the ball was stopping, hence it was difficult to bat towards the end," said Kohli after the game.

Dhoni scored four boundaries in his innings before hitting India's only six in the penultimate over. But with the asking rate shooting to 15, the Indian duo opted for singles and doubles instead of playing big shots as Virat Kohli's side slipped to a 31-run defeat.

Former England captain Nasser Hussain was severe in his criticism and felt the fans would have been disappointed seeing India's approach which seemed passive towards the end of the innings.

"I am completely baffled. What's going on! This is not what India needed. They need runs. What are they doing? Some Indian fans are leaving now. Surely they must want to see Dhoni go for his shots, even if he slogs it off in the air," Hussain said while commentating during India's chase.

"If there was any team that had the ability to stop India's winning run. It was England. Dhoni's approach in the last few overs however was baffling," he tweeted.

The World Cup-winning former captain, however, got some support from Indian Tennis veteran Mahesh Bhupathi.

"Reading what the arm chair experts say on Twitter about the game having never played professional sport under pressure is as entertaining as watching a tough run chase," Bhupathi tweeted.