'He was given plasma but treatment didn't work.' 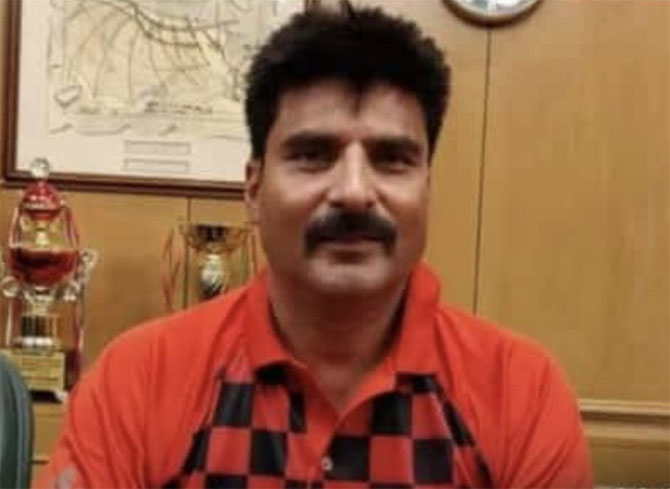 IMAGE: Sanjay Dobal, who was popular among the well-known Delhi cricketers like Virender Sehwag, Gautam Gambhir and Mithun Manhas, played for the famous Sonnet Club and was coached by Tarak Sinha. Photograph: Mithun Manhas/Twitter

Well-known club cricketer and former Delhi Under-23 support staff Sanjay Dobal died on Monday morning after failing to recover from COVID-19 infection, a source close to the family said.

Dobal was 53 years old and is survived by his wife and two sons -- elder Siddhant, who plays first-class cricket for Rajasthan and younger Ekansh, who made his debut for Delhi U-23 side.

"Dobal showed symptoms and was first admitted to a medical facility in Bahadurgarh, a week back. He had tested positive for COVID-19. However his condition deteriorated and was shifted to a Dwarka hospital with better facilities. He was given plasma but treatment didn't work," a DDCA official said.

A familiar figure at the Feroz Shah Kotla, Dobal was popular among the well-known Delhi cricketers like Virender Sehwag, Gautam Gambhir, Mithun Manhas. He also played for the famous Sonnet Club and was coached by Tarak Sinha.

In fact, Gambhir and Manhas had appealed through twitter for plasma donors and Aam Aadmi Party MLA Dilip Pandey had arranged for donor.

While he didn't play in the Ranji Trophy, he was associated with coaching junior cricketers after his playing days with formidable office side Air India was over.

He has also been the local manager for India versus England women's Test at Jamia in the last decade.