IMAGE: The middle-orders' struggles in both the dugouts will make it an engrossing contest with DC bowlers expected to hold sway in Nortje's presence. Photograph: BCCI

Delhi Capitals skipper Rishabh Pant will aim to display better tactical acumen in Catch-22 situations against a 'blow-hot-blow-cold' Punjab Kings in what promises to be a battle of brittle middle-orders in an IPL match in Mumbai on Sunday.

Both teams are coming into the 'North Indian Derby' after enduring defeats in their previous games but Delhi Capitals are definitely a better side on paper.

Pant, relatively inexperienced in terms of IPL captaincy, lost the plot in the last game where he didn't finish his best bowler Ravichandran Ashwin's quota and instead used Tom Curran's friendly medium pacers.

As coach Ricky Ponting pointed out, he would expect a better "on his feet" thinking from the young captain.

The likely addition of Anrich Nortje in the playing XI will only bolster Pant's bowling attack which lost its bearings during the last match with Curran's lack of pace on a slow track being cannon fodder for Chris Morris and David Miller.

This was after a healthy 200 plus total in the opening game.

The nature of the Wankhede track is posing a few questions under lights for top-order batsmen as the last two games have shown with underlying moisture aiding quality fast bowling.

So, KL Rahul versus Kagiso Rabada and Chris Woakes bowling to Chris Gayle could be as enticing as Prithvi Shaw encountering the guile of Mohammed Shami and Shikhar Dhawan trying to unsettle a disciplined Arshdeep Singh.

Jaydev Unadkat and Rajasthan Royals have shown that despite massive improvements, there are still some chinks in Shaw's armoury and Arshdeep could be used to expose that.

Both teams are top heavy in batting with DC dependant on Shaw, Dhawan and Pant for doing the bulk of scoring while the same job profile is held by KL Rahul, Chris Gayle and Deepak Hooda in the Punjab line-up.

Even the weaknesses of both the teams are pretty similar.

If Ajinkya Rahane's lack of power-hitting and Marcus Stoinis's indifferent show is affecting the DC middle-order, Mayank Agarwal's prolonged bad-patch coupled with Nicholas Pooran's susceptibility to short balls over his shoulder are not great news for Punjab either.

The middle-orders' struggles in both the dugouts will make it an engrossing contest with DC bowlers expected to hold sway in Nortje's presence.

Neither has Murugan Ashwin, a mystery spinner who has done nothing of note that would force Pant and Ponting to have sleepless nights.

Anil Kumble and Rahul may like to think of Ravi Bishnoi as an option but they also need to factor in the shorter boundaries in Mumbai, which can be devastating for wrist spinners if their length is haywire. 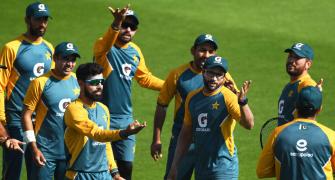