2014 was Ishant Sharma's best year in terms of performance. He had 38 wickets in eight Tests, including the match-winning 7 for 74 against England at Lord’s.

Rajneesh Gupta decodes the pacer's career, which after an indifferent start seems to be living up to the initial promise. 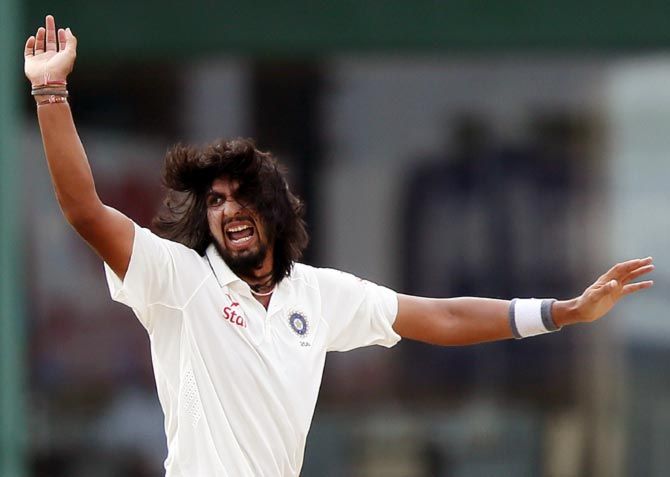 Handed the responsibility of leading India’s bowling attack, Ishant Sharma is living up to expectations.

The Delhi pacer played a major role in the 2-1 Test series triumph in Sri Lanka, the first for India in the island nation after a long wait of 22 years.

Ishant, who took 13 wickets in the series, also became the eighth Indian bowler to scale the 200-wicket mark in Test cricket.

After Zaheer Khan's exit from the team, the onus was on Ishant to guide the next crop of Indian fast bowlers. Going by his performances in the last 12 months he is doing a pretty good job.

Rajneesh Gupta decodes the pacer's career, which after an indifferent start, seems to be living up to the initial promise.

Indian bowlers with 200-wickets in Tests:

Among the Indian bowlers to take 200 wickets, Ishant is the slowest, having attained the landmark in 65 Tests.

Harbhajan Singh is the fastest Indian to the 200 wickets mark, having done it in 46 matches, while his former spin colleague Anil Kumble did it in 47.

If you check out Ishant’s career progress in terms of 50-wicket brackets, it is clear that the fast bowler has hit a purple patch lately.

He took 33 Tests to get his first 100 wickets but slowed down considerably thereafter, taking as many as 21 Tests to get another 50.

His showing improved rapidly since then as the next 50 scalps came from only 11 Tests.

His best average is against New Zealand, against whom he has taken 30 wickets in six matches, while against South Africa he claimed just 20 wickets in eight Tests.

Like is the case with all players, Ishant also enjoys bowling in the comforts of home pitches in India, taking 62 wickets in 22 Tests.

However, his best record is in the West Indies -- 22 wickets from three matches, at an average of 16.

Since his debut in 2007, Ishant was always earmarked as a special talent but consistency was never his forte. In the first few years he enjoyed a roller-coaster ride and dropped from the squad a few times, but seems to have hit top gear in the last couple of years.

2014 was his best year in terms of performance as he picked up 38 wickets in eight Tests, including the match-winning spell of 7 for 74 against England at Lord’s.

In terms of wicket-taking, 2011 was the most profitable year, with 43 wickets coming from 12 Tests, though with a strike rate in the high 60s.

The breakdown of his career in two parts -- before 2013 and after – reveals the entire story.

If you break it down further, in span of 10 Tests each, you will again notice the dramatic rise in his performance in the last 15 Tests.

Performance in each span of 10 Tests

What is important, though, is Ishant’s contribution in India’s victories.

He was part of 25 Test wins in which he has claimed 90 wickets, at a strike rate of 50, while in matches lost he was quite poor, with just 47 wickets coming from 21 games, at a rate of just over two wickets per Test match.

Majority of Ishant’s victims are right-handers, as seen in the table below.

Like most fast bowlers, Ishant does make the new ball count as can be seen in his wicket distribution according to batting positions.

His most frequent victims have been openers, accounting for 47 of them among, including 26 of the No. 2 batsmen.

Majority of his wickets are top order batsmen, as much 67 percent, amounting to 133 wickets in sum.

Australian and English batsmen are among Ishant’s most favourable victims.

England captain Alastair Cook was dismissed the most by him, eight times in all, while Shane Watson, Ricky Ponting, Michael Clarke and Ian Bell fell to the Indian pacer seven times each.

Ishant’s best bowling performance in an innings so far is the 7-74 he took against England at Lord’s, which helped India win the Test last year.

Interestingly, out of the seven times he claimed five wickets or more, India won only twice, including the recently-concluded third Test against Sri Lanka in Colombo.

Best performances in an innings: