Bangladesh first team to have two concussion substitutes in one day 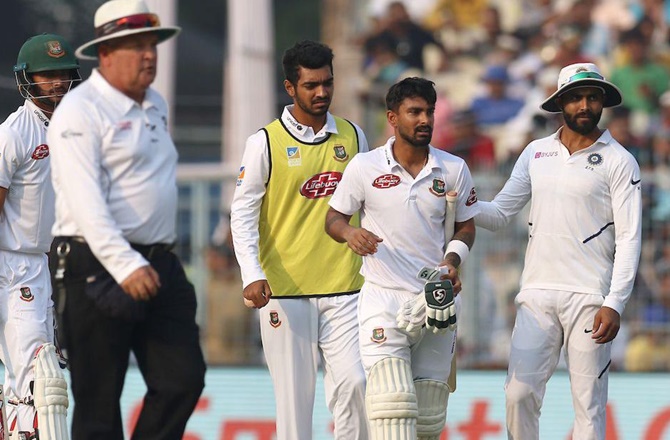 IMAGE: Liton Das was retired hurt after being hit on his head. Photograph: BCCI

Two Bangladesh batsmen -- Liton Das and Nayeem Hasan -- were retired hurt from the ongoing Day/Night Test against India in Kolkata, forcing the visitors to bring in as concussion substitutes players who had been dropped from the team.

"They are fine. We followed the concussion protocol. They went for CT scans as precautionary measure. They are back with the team. They seem to be fine," he said.

Both Das and Nayeem were hit by Mohammed Shami snorters and were replaced by Mehidy Hasan and Taijul Islam at the Eden Gardens.

Bangladesh wicketkeeper-batsman Das was taken to a city hospital for a scan before another Shami delivery hit Nayeem, who was interestingly attended to by Indian team physio Nitin Patel.

Mehidy came in as concussion substitute after Das was hit on the opening day of their maiden Day/Night Test.

However, Mehidy, an off-spinner, will not be allowed to bowl as per the concussion substitute rule. Mehidy, though, did not last long as he was dismissed by pacer Ishant Sharma for just eight runs.

Das was retired hurt after being hit on his head at the stroke of lunch at the Eden Gardens on Friday.

Trying to play a pull short off a Shami bouncer, the heavily-lacquered pink ball blazed in and hit his helmet in the forehead region in the third ball of the 20th over. He was batting on 16 then.

The physio rushed in, conducted a test and he continued batting, responding with a boundary in the next delivery.

Das hit another boundary in the next over off Ishant and added nine runs before complaining of discomfort. He was next seen walking off the field after a long conversation with the umpire, forcing the end of the first session with the score reading 73 for six.

Das' like-for-like substitute Saif Hassan is down with a (split webbing) injury, forcing the visitors to opt for Mehidy as concussion substitute.

According to the protocol, a proper medical report has to be submitted to the match referee for a concussion substitute.