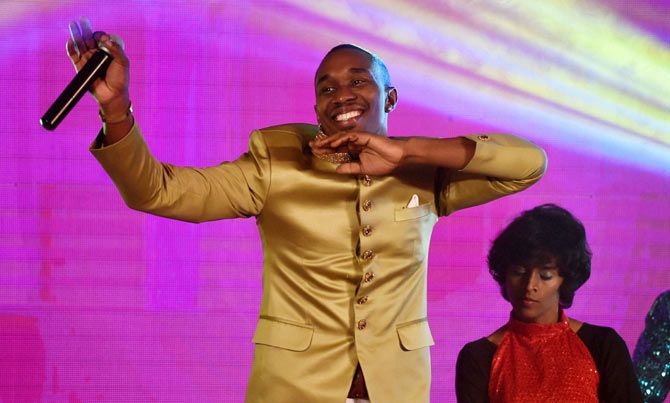 West Indies all-rounder Dwayne Bravo dances at the launch of his single, Chalo Chalo, in Chennai on Sunday. Photograph: PTI

When not destroying the opposition with his batting, bowling or on-field antics, he is known to entertain teammates and friends singing for hours.

Chalo Chalo, a single sung by the West Indies all-rounder, was released at an event in Chennai on Sunday.

After the very popular music video Whistlepodu, launched a few years ago, Chennai Super Kings has a new song they can call their own. Mahendra Singh Dhoni with wife Sakshi and daughter Ziva at the launch of Dwayne Bravo's single on Sunday. Photograph: PTI

The song has a primarily Caribbean beat with an Indian touch. The Indian flavour to the single is lent by Trinidadian singer/songwriter Nisha B. The female vocalist sings for Carib band Karma. "On the field I am known as Dwayne Bravo, but outside I am DJ Bravo," said Bravo at the launch.

Bravo is quite the crooner, having released six singles earlier.

Here’s hoping the song motivates the team to another Indian Premier League title.