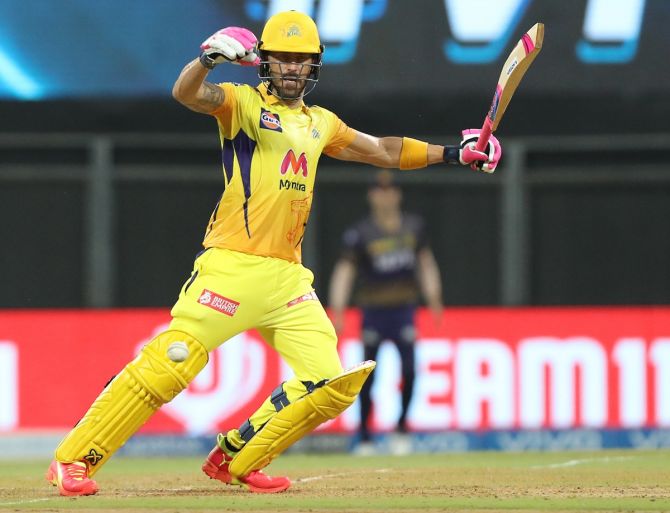 IMAGE: Faf Du Plessis, who played for the Royal Challengers Bangalore (RCB) in the IPL last season, was part of the CSK from 2011 to 2021, except for 2016 and 2017 when the team was suspended. Photograph: BCCI/IPL

Former South Africa captain Faf du Plessis has been roped in by the Johannesburg franchise owned by IPL giants Chennai Super Kings (CSK) as their marquee signing for the inaugural edition of the Cricket South Africa (CSA) T20 League, according to a report.

Wednesday was the last day for the direct acquisition of players for the six-team upcoming league.

The inaugural edition of the CSA T20 League is scheduled to be played in January-February 2023 and all the six franchises in the tournament have been acquired by current IPL team owners.

The CSK-owned Johannesburg franchise is also believed to have roped in England all-rounder Mooen Ali as one of its marquee players, according to Cricbuzz.

Ali, who represents CSK in the IPL, had also featured in the marquee players' list for the UAE League (ILT20).

But, according to the Cricbuzz report, he is said to have picked the T20 tournament in South Africa over ILT20, which will also be held in January-February next year.

The talented Dewald Brevis, who played for Mumbai Indians in IPL along with England all-rounder Sam Curran are the other two direct signings of the franchise.

For the record, Rashid plays for Gujarat Titans, Rabada and Livingstone for Punjab Kings and Curran last played for CSK in the Indian Premier League.

“With our direct player signings, we have taken the first step towards building the MI philosophy - having a strong core around which the team will be planned. I am glad to welcome Rashid, Kagiso, Liam, Sam and happy to have Dewald continue with us on this new journey," team owner Akash Ambani said.

West Indies stars Kieron Pollard, Dwayne Bravo and Nicholas Pooran are among players who have signed up for participation in the inaugural edition of UAE's International League T20 (ILT20).

UAE's International League T20 (ILT20) on Thursday revealed the next batch of exceptional, world-recognised cricketing talent that has signed on to participate in the inaugural event. Having recently announced some of the biggest names in global T20 cricket today, the league bolsters their roster by adding more impressive names to its list of Marquee Players. Those joining this illustrious list include; Kieron Pollard, Nicholas Pooran, Dwayne Bravo, Dasun Shanaka, Ollie Pope and Fazalhaq Farooqi.

Speaking on the latest list of players to join the League, Mubashshir Usmani, Emirates Cricket's General Secretary said: "Our team continues to be impressed with the quality of talent that is committed to participating in the ILT20. We are very pleased to see the list of Marquee players grow in stature which is evident through our latest reveal, and we are encouraged to see exciting, emerging talent join such experienced names from world cricket."