'I had offers from the BJP, but my ideology is different from theirs.' 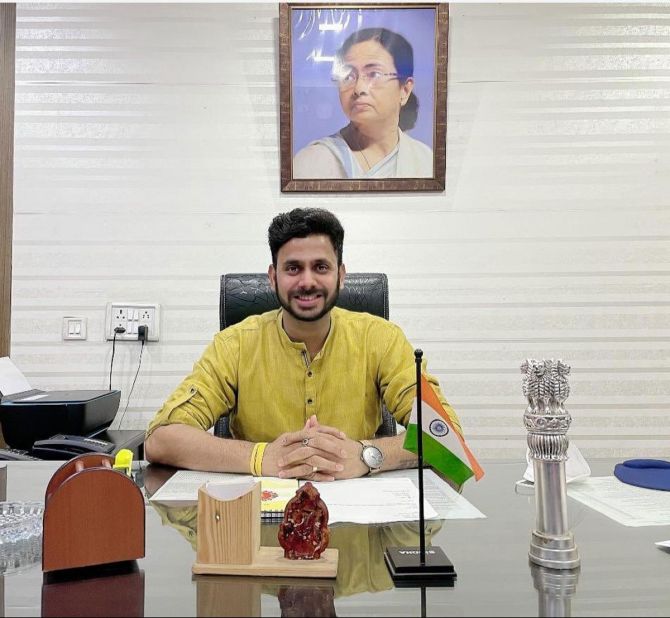 Having made a surprise switch from cricket to politics, Manoj Tiwary is hoping to leave a mark in his second innings.

As a cricketer, Tiwary was one of the top-rated batsmen in domestic cricket, but was unable to match his achievements at the international level, mainly due to limited opportunities as he featured in just 12 ODIs and three T20Is.

He has made a smashing start in politics, with a victory on his electoral debut as he likes to call it in cricketing terms.

The former Bengal captain, who joined the All India Trinamool Congress ahead of the West Bengal assembly election, won the election in Howrah's Shibpur assembly constituency by more than 30,000 votes.

Earlier this week, Tiwary, 35, took the oath as Bengal's minister of state for youth affairs and sports.

In an exclusive conversation with Rediff.com's Harish Kotian, Tiwary reveals what made him take the plunge in politics.

What prompted your move to politics despite being an active cricketer?

Earlier this year, I sustained a cartilage injury which ruled me out of the Mushtaq Ali Trophy and out of cricket for nearly four months. The doctor told me to take steroid injections to ease the pain, which I did. The pain went away and I was able to play, but there was still some discomfort which made things difficult.

I still played because the (Bengal) team management wanted me to play, but the performances were not up to the mark. I had problems running between the wickets, I was not quick enough.

I had a couple of good innings, but other than that I was not able to perform well.

That is when I thought that after playing for so long I didn't want to continue playing like this. If I wanted, I could have continued playing, but I didn't want to and I withdrew my name from Bengal's pre-season camp in January.

There was another reason too. In 2019, Didi (Trinamool Congress President and West Bengal Chief Minister Mamata Banerjee) had asked me to fight the Lok Sabha election. But due to some reason, I was unable to do it.

So that was playing on my mind -- Didi had offered me to contest the elections, she trusts me so much. Didi always remembers to send me messages on my birthday.

Didi called me this time too, she told me, 'Manoj, you join our party and make us stronger'. I could not refuse Didi and everything fell into place once I made the decision.

And the way Didi was being attacked this time! So many chief ministers and central ministers all visited Bengal, trying their best to defeat Didi.

You had so many people attacking her in the lead to the elections, and who were these people? These were the same people who were unable to handle COVID-19 and the lockdown situation last year.

The way people died last year due to the lockdown... so many migrants passed away as they made their way back home. I still remember that migrants were run over by a train as they decided to sleep on the railway tracks for the night. These people and many more died because the central government was unable to handle the situation.

If you see the farmers' protest went on for so many months, so many farmers also committed suicide, but the government is still not ready to listen to them.

This central government has also been lying to the people for the last few years. They claimed we will bring back the black money stacked abroad, we will deposit Rs 15 lakh in every Indian's account. They also made a lot of other claims, but they have done nothing yet.

So there were a lot of things that came together and made me switch to politics.

Tell us about your special connect with Didi.

The TMC government was formed in 2011. When the Kolkata Knight Riders won the IPL in 2012, I was the one who hit the winning boundary in the final. We had a celebration at the Eden Gardens after the IPL win and there was also an open bus parade for the team. So from that time onwards, Didi has stayed in touch with me. She likes me a lot.

Whenever I have met her at any event, she has treated me warmly and welcomed me. I have always been in her good books and that is why I think she felt that I should be part of TMC.

I have utmost respect for her, so when she asked me this time I just accepted it and followed in her footsteps.

But the people of Bengal have given a mandate to the TMC and also given a big slap on the face of such people who were misleading others. 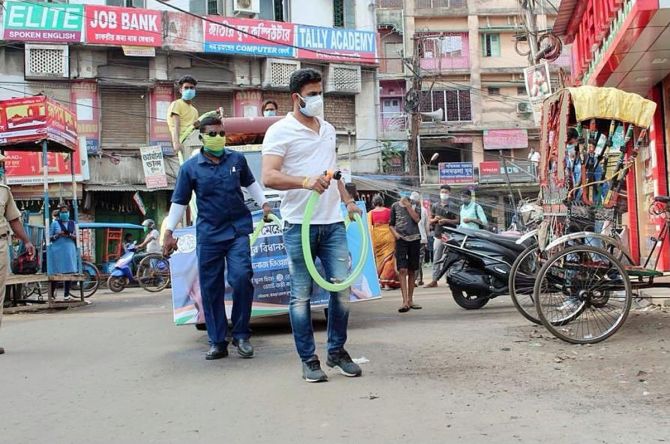 You also got offers from the BJP to contest this election? Why did you turn it down?

Yes, I had offers from the BJP, but my ideology is different from theirs. Look at the situation that they created in the country, the second wave has taken the country by storm.

I believe that you should first fulfill all the promises made to the people and then you can spend 1000 crores (Rs 10 billion) on building statues.

When they were not in government, the BJP used to say that petrol should be under Rs 60, gas should be this much amount -- just see where the fuel prices have reached today.

Since I am a cricketer, I would say in cricketing terms that under this government both petrol and diesel are getting to their centuries. In fact, petrol has already got his century and now diesel has come close to the mark.

They (the BJP) should be proactive as a government, they should have built health infrastructure so we would not have faced this problem today. They don't value the life of a common man because if they did they would have never let the situation coming to this disastrous stage.

Were you surprised by the victory on debut?

It was a very good experience. I have always been confident in whatever I do, whether I am successful or not. When I step on to the field, I always enter in a confident frame of mind.

If Didi has placed so much trust on me and given me the ticket, then she must have also thought about it a lot because it is not easy to pick the right people.

I salute her leadership skills, her reading of the political scenario, it is very good.

I belong to Shibpur, the place from where I contested from. I was born in Howrah and was brought up there. The reason why people from Shibpur accepted me because the BJP had done nothing for them. They know me well, they know I am young and they are hopeful that I will work for them.

I have heard all the problems of the people in Shibpur and I have assured them that I will work towards resolving it. I am working for the people because that is why I entered the field of politics.

In my constituency they are 236,000 people, so I have to take care of all of them and that is my big responsibility.

Whatever experience I have gained from the field of play in terms of leadership, I will try and use it to take my constituency forward and resolve all the issues of the people there.

You have been appointed minister of state for youth and sports. What will be your role?

I will be the deputy to Aroop Biswas, who has been looking after the sports ministry for the last five years. My first task is to meet him and discuss what steps we need to take.

Whenever I used to play cricket, I used to think that cricket is always in the limelight. You also have a huge fan following for football in the state.

Apart from these two sports, there are many others sports where the youngsters work very hard, but are unable to make their name or get coverage in the media. So my main aim will be to give the platform to the young people who are working in other sports, which have been neglected for years, and which can help us win medals at the Olympics.

I will look to give them the confidence that even if you are pursuing sports other than cricket or football, you can still do well and have a bright future. They will have complete support from my side and I will make sure that talent gets the right opportunity.

I will also work towards creating job opportunities for sportsperson who are in need. 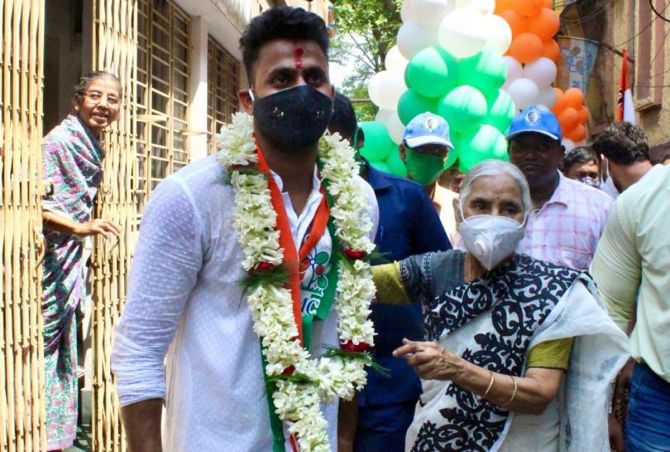 IMAGE: Manoj Tiwary campaigns in Shibpur ahead of the West Bengal assembly election.

How does the TMC government plan to tackle the COVID-19 situation?

Didi has trictly told us to work on helping the people.

We have to defeat COVID-19, that is our first target. We have to make people aware, make them follow the proper protocols and try to vaccinate everyone.

Even with the vaccination, we are suffering. Didi had asked for 3-4 crore vaccines (30 to 40 million vaccines) but the Centre has only sent us one lakh (100,000). How can it work this way?

We are working to ramp up hospital beds, Covid centres, safe houses and provide oxygen to everyone who needs it. We have converted a football stadium into an isolation centre for Covid patients.

The work is going on well and no one is facing any issues like finding a hospital bed. Even if someone sends us a message late at night, our party people work to fulfill that request, whether it is getting people admitted or getting oxygen for the patients.