'At 45, he was willing to fight for his country'

Such was Brian Close's reputation for bravery that he received a call back to the national team at age 45, to face the fearsome West Indian attack. Who was Brian Close?
England's youngest-ever Test cricketer and the man who courageously took blows from the fearsome West Indies pacers on his body, Brian Close died on Sunday, September 13, aged 84. 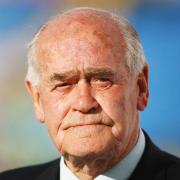 The left-handed batting all-rounder made his debut aged 18 against New Zealand at Old Trafford in 1949 and played 22 Tests, of which he captained England in seven.

The former Yorkshire skipper, who also played three One-Day Internationals, had a highest score of 70 to go alongside his 18 wickets in the longer format.

A daredevil fielder at short leg, such was Close's reputation for bravery that he received a call back to the national team at age 45, after a nine-year gap, to face the Caribbean pace battery at home in 1976.

His last innings, in the third Test of the series against the West Indies at Manchester, when he went out to open the batting with John Edrich, has become part of cricket folklore.

Close made 20 off 108 balls, fending off bouncers with his body to deny the Windies bowlers early success with a opening partnership of 54 with Edrich against the likes of Andy Roberts and Michael Holding.

Close was the young Botham's first county skipper at Somerset in the 1970s when the great all-rounder burst on to the scene with his good friend, the swashbuckling West Indies batsman Viv Richards.

'The best captain a young player could ever have wished for! Myself & IVA (Richards) owe you so much,' Botham said on his Twitter account.

'Such a sad day,' said Vaughan.

'He was a true inspiration to all of us. Thanks Brian for helping me as a kid growing up at Yorkshire.'

'I once had an lbw problem. Closey, aged 60, came into the nets and batted without pads "Only way, young man, you will sort your problem".'

Another Yorkshireman, former Test umpire Dickie Bird, recounted a familiar tale involving Close's fielding exploits at short leg before the invention of helmets.
'He'd take anybody on, he had no fear whatsoever,' said Bird.

'He used to field in front of the bat and was hit on the head once, I remember.'

'The batsman pulled the ball, it hit him on the head and it flew to cover. Somebody dropped it and Brian's first words were, "Have you caught that?".'

Michael Holding was a member of the hostile attack that left bruises all over Close's body when the then 45 year old took on the West Indies.

'He was willing to go out there and fight for his country.'