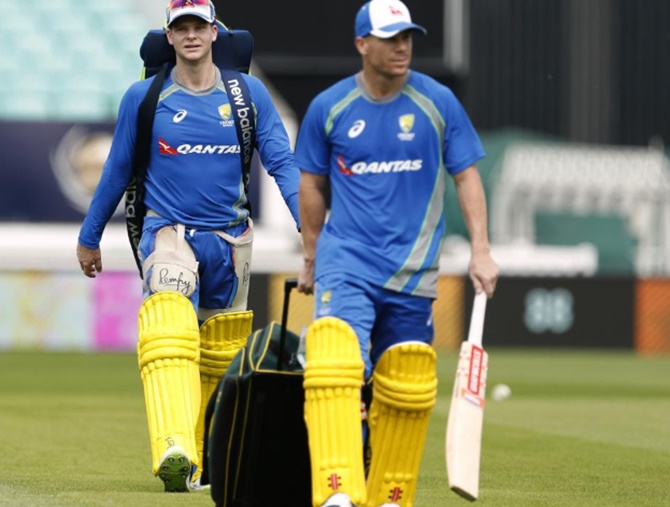 Steve Smith and David Warner could be in line for an immediate return to the Australian team when their bans expire midway through the upcoming One-day international (ODI) series against Pakistan in the United Arab Emirates.

The five match Pakistan series will be held from March 22-31, Pakistan's Cricket Board said.

Smith and Warner, who were banned for their roles in last year's Cape Town ball-tampering scandal, are eligible for selection again on March 29, meaning they can be called up for the fourth ODI against Pakistan.

Australia face Pakistan in the first ODI in Sharjah on March 22, with the second match scheduled for two days later at the same venue.

The teams will then move to Abu Dhabi for the third match on March 27, with the final two games in Dubai on March 29 and 31.

The confirmation of dates for the Pakistan series also gives Australian players with lucrative Indian Premier League (IPL) contracts a measure of clarity, as players called up for the series will not be immediately released for the IPL.

The 2019 season of the IPL is scheduled to begin late March, with Australian players selected for the Pakistan series expected to be unavailable until April 2 at the earliest.

Bengal pace spearhead Ashok Dinda was hit on the forehead while attempting a sharp caught-and-bowled chance during Bengal's Twenty 20 practice match at Eden Gardens, in Kolkata, on Monday.

The incident happened when batsman Birender Vivek Singh hit straight and Dinda attempted the catch on his follow through but it slipped from his hand and hit his forehead, a Bengal support staff member said.

"Dinda looked fine as he completed the over before returning back to the dressing room. As a precautionary measure, he was taken for scans. There is nothing alarming but he has been advised two days of rest," a CAB official said.

The 2011 Mushtaq Ali champions Bengal open their domestic T20 campaign against Mizoram in their group D fixture at the Barabati Stadium in Cuttack on February 21.

Bengal failed to make the final at home last season after finishing third in the Super League Group B.

Former India opener Vikram Rathour's appointment as the batting coach of India A and U-19 team has been put on hold after his Conflict of Interest was brought to the notice of the Committee of Administrators (CoA).

Rathour was supposed to start with India A assignment in Wayanad but for now his appointment has been stalled indefinitely.

Rathour is the brother-in-law of current India U-19 national selector Ashish Kapoor and his appointment would have been a case of Conflict of Interest.

"Yes, the CoA had given a go ahead for Rathour's appointment but today Rathour gave a written declaration of his relation with Kapoor," a senior BCCI official told PTI on Monday.

"Now the matter was discussed with Mr Rai and it was concluded that only an Ethics Officer could have decided if Rathour working with U-19s during Quadrangular series would tantamount to Conflict of Interest," he said.

However with no Ethics officer in BCCI, it was thought Rathour's appointment would have sent out wrong signals.

"The appointment letter was not signed. Saba had only got a go ahead on the basis of Dravid's recommendation. For now, he will not be recruited in the A or U-19 set up," the official confirmed.

While India A coach Rahul Dravid wanted Rathour in the India A and U-19 roster, BCCI (GM Cricket Operations) Saba Karim did not intimate the CoA about the potential case of Conflict of Interest.

PCB Chairman Ehsan Mani has rejected the impression that Prime Minister Imran Khan, who had led the country to 1992 World Cup triumph, is meddling in cricket affairs.

"He doesn't interfere at all. But he has made it clear that he wants to see a cricket system in Pakistan free of politicisation and a internal structure which is based on quality rather than quantity," Mani said in Lahore.

Imran, in his position as patron-in-chief of the Pakistan Cricket Board (PCB), nominated Mani for the position of PCB Chairman after Najam Sethi resigned last year.

Mani admitted that the PCB was a very politicised institution and time was required to change the culture and working in the board.

"The task given to me is to make our domestic structure a quality one and to streamline things in the board to such an extent that it becomes an exemplary institution and is second to none among the boards of the world."

Mani also sought to dispel the impression that because of pressure from Imran, the PCB would end the role of departments in domestic cricket in its new structure.

"We are not finishing departments as they have a role to play in Pakistan cricket but we are trying to improve our domestic set-up," he added.

Mani said Imran wanted to see Pakistan become a consistent winning side whose cricket system was taken as an example by other Boards.

Sidra Ameens 52 and three-wicket hauls from Diana Baig and Nashra Sandhu set Pakistan up with a four-wicket win over West Indies in a cliff hanger finish to the third ODI match at the ICC Academy, handing Pakistan a 2-1 series victory on Monday.

By chasing down the target of 160 in 47.2 overs, Pakistan have moved into the top four of the ICC Women’s Championship table, pushing West Indies and England down a place to fifth and sixth position respectively.

West Indies opted to bat but lost opener Kycia Knight for a duck in the very first over by pacer Baig. Their captain Stafanie Taylor and Deandra Dottin injected some momentum by putting on a 34-run partnership before the latter was run-out for 28.

Taylor continued with support from Shemaine Campbelle and the duo put up a crucial 52 by the end of 12 overs.

However, the match turned when Campbelle was stumped off for 26, which opened the remaining batting line-up. Chedean Nation (3), Natasha McLean (2) and Chinelle Henry (6) returned in quick succession before Baig dismissed Taylor for 52.

With little support from the lower-order, West Indies folded for 159 in 47.3 overs.

During their run-chase, Pakistan’s Ameen and Nahida Khan added 32 runs for the opening wicket. After Nahida’s departure for 15 off Shakera Selman, Javeria Khan came out to share the onus with Ameen.

The pair added 44 for the second wicket before the dismissal of Javeria for 49. However, Ameen once again found support in Nida Dar after the departure of skipper Bismah Maroof for five.

Ameen (52) and Dar (26) stitched a partnership of 46, which took Pakistan to within 32 runs of victory. The duo were dismissed in quick succession but with Kainat Imtiaz and Sana Mir, both remained unbeaten on 12 each as Pakistan ended with 163 for the loss of six wickets and sealed their victory in the three-match series 2-1 against West Indies.