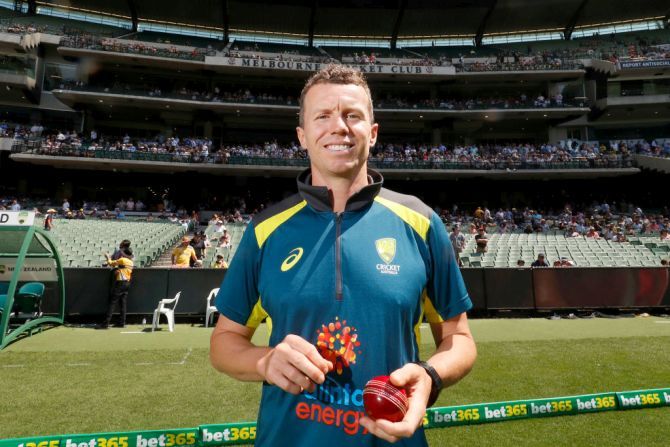 IMAGE: Peter Siddle made his Test debut in Mohali in 2008 and claimed India's Sachin Tendulkar as his maiden wicket. Photograph: Darrian Traynor/Getty Images

Australia paceman Peter Siddle has announced his retirement from international cricket at the age of 35 after taking 221 wickets in a distinguished 67-Test career.

Siddle broke the news to his team mates at the Melbourne Cricket Ground on Sunday after being released from the squad for the third and final Test against New Zealand in Sydney.

"It's always hard to know when the right time is," he told local broadcaster Fox Cricket.

"The Ashes was the main goal, to try and get on that touring party and be a part of that series.

"Once I'd ticked that off, I was talking to Painey (captain Tim Paine) and JL (coach Justin Langer), I thought I could have (retired) there, but the chance of getting one last crack if it came in Australia ... would have been nice."

Siddle will continue to play domestic cricket for Victoria state and Twenty20 side Adelaide Strikers in the Big Bash League, along with English county cricket for Essex.

The fiery redhead, born in country Victoria, has been on the fringes of Australia's formidable pace attack for a number of years but featured in the team's retention of the Ashes in England earlier this year.

He made his Test debut in Mohali in 2008 and claimed India's Sachin Tendulkar as his maiden wicket.

He became the ninth Australian to take a hat-trick when he dismissed England's Alastair Cook, Matt Prior and Stuart Broad in successive balls on his 26th birthday in the 2010 Ashes Test in Brisbane.

Although plagued with injuries early in his career, Siddle became one of Australia's most durable bowlers and his ability to keep steaming in after long spells saw him inevitably tagged a "workhorse" paceman.

He was much more than that, however.

With eight five-wicket innings hauls across his career, Siddle was often the spearhead during a period of transition following the retirements of bowling greats Glenn McGrath and Shane Warne.

He also played in 20 one-day internationals and two T20s.

The rise of Pat Cummins, Josh Hazlewood and Mitchell Starc saw him pushed to the sidelines in recent years, and he went unused for a two-year period between 2016-18.

But a strong county season and his proficiency on English pitches earned him a recall for the Ashes where he contributed seven wickets in three matches to help Australia retain the urn for the first time since 2002/03.

"Sids has been the heart and soul of the team for a long time," Paine said.

"He has a massive heart and is a fantastic bowler. He'll be very much missed around the group."

Former India opener Gautam Gambhir on Sunday urged the BCCI to "dissolve" Delhi and District Cricket Association and demanded bans for officials of the state body, who were involved in fracas during its Annual General Meeting in New Delhi

A DDCA release stated that all the members unanimously "passed the resolutions and agendas" but sources said that the AGM had its share of drama.

Blows were exchanged and ruling group's joint secretary Rajan Manchanda was slapped by opposition's Maqsood Alam during the meeting.

Gambhir, a BJP Member of Parliament, described the incident during the AGM as "shameful".

"DDCA GOES "ALL OUT" ...AND DDCA IS ALL OUT FOR A SHAMEFUL DUCK. Look, how handful of crooks are making mockery of an institution. I'd urge @BCCI  @SGanguly99 @JayShah to dissolve @delhi_cricket immediately. Surely, sanctions or even a life ban for those involved," Gambhir tweeted.

A source said the AGM was "disrupted by supporters of general secretary Vinod Tihara after resolution 3, 4 and removal of its Ombudsman Justice (Retd) Badar Durrez Ahmed was defeated by almost 75 percent" of the members.

The DDCA appointed Justice (Retd) Deepak Verma as its new Ombudsman replacing Badar, only a day after the latter asked DDCA members to exercise restraint. It was on Badar's suggestion, that the proceedings at the AGM were video recorded.

The Delhi and District Cricket Association (DDCA) on Sunday formed a four-member disciplinary committee to probe the incident involving two U-23 players who were called back for allegedly misbehaving with a woman in a hotel before a match.

The incident happened at a Kolkata hotel, a day before the Delhi U-23 team's CK Nayudu Trophy match against Bengal.

The committee will be headed by Shiv Nandan Sharma, a former Superintendent of Customs and Central Excise, and will also comprise Alok Mittal, Apurv Jain and Sudhir Aggarwal.

Mittal is a Chartered Accountant.

"The decision to form the committee was taken at the AGM today," DDCA's senior official Ravi Jain told PTI.

The two players in question are Kuldeep Yadav and Lakshay Thareja, who were on Friday sent home for their alleged misconduct.

Batsman Thareja has, in fact, played a List A match for Delhi and scored a half-century while pacer Kuldeep was set to replace Ishant Sharma in Delhi's next Ranji game against Punjab.

BCCI ethics officer D K Jain has rendered the conflict of interest complaint against former cricketers and CAC members Shantha Rangaswamy and Anshuman Gaekwad as "infructuous", but the case involving Kapil Dev has still not been decided.

Jain had called Rangaswamy, Gaekwad and Kapil for a personal hearing on December 27 and 28 even though all three had stepped down from the Cricket Advisory Committee (CAC) in September and October, following the complaint filed by Madhya Pradesh Cricket Association (MPCA) life member Sanjeev Gupta.

Gupta had claimed that all three don multiple cricketing roles, when as per the BCCI constitution, no person can occupy more than one post at the same time.

"Since they (Gaekwad, Rangaswamy) have resigned from their respective posts, the complaint has been disposed of. In Kapil's case, the complainant needed more time to file an application, I have given him that," Jain told PTI on Sunday.

Rangaswamy, who like Gaekwad is on the BCCI apex council, is no more involved with Indian Cricketers Assoication (ICA) as its director.

Gaekwad was a working group member which was set up for ICA's formation and is also no more part of BCCI's affiliation committee.

While Kapil and Rangaswamy were unavailable, Gaekwad deposed before Jain.

The case concerning BCCI employee Mayank Parikh, who also faces a conflict of interest charge, is not settled yet.

The Kapil-led CAC, when it was existent, had appointed the senior men's and women's head coach.

Being part of CAC is an honorary job and World Cup-winning captain Kapil had earlier made it clear that conflict of interest should not be applicable to those who are not being paid for their services.

The uncapped 26-year-old scored 111 for South Africa A against England last week in the last warm-up game before the first Test in Pretoria, where opener Markram injured his finger.

Petersen has played 88 first class matches, with an average of 40.66.

Markram will undergo surgery on his finger this week and will miss the rest of the four-Test series against England.

The second Test at Newlands is from January 3-7.