IMAGE: Kazi Anik Islam, who was Bangladesh's leading wicket-taker in the 2018 Under-19 World Cup, tested positive for Methamphetamine, a prohibited substance, during a National Cricket League game in the same year. Photograph: Lee Jae-Won/Reuters

Young Bangladesh pacer Kazi Anik Islam has been handed a two-year ban by the Bangladesh Cricket Board for failing a dope test in 2018.

Kazi, who was Bangladesh's leading wicket-taker in the 2018 Under-19 World Cup, tested positive for Methamphetamine, a prohibited substance, during a National Cricket League game in the same year. The 21-year-old admitted to the offence.

"ln Mr Anik's case in considering his level of Fault, the BCB has considered his youth and relative inexperience, the fact that he did not ingest the Prohibited Substance in an effort to enhance his sport performance, his limited anti-doping education and his prompt admission of the anti-doping rule violation when first notified to him," said the Bangladesh Cricket Board in a statement.

"ln addition to this, in considering the appropriate sanction, the BCB is giving him credit for agreeing an outcome that avoids the need for a hearing and so saves considerable time and money for use elsewhere in the fight against doping.

"ln light of all of this, the BCB considers that a period of lneligibility of two (2) years is reasonable and proportionate in respect of Mr Anik's case."

England's Vince hoping to make most of Ireland series 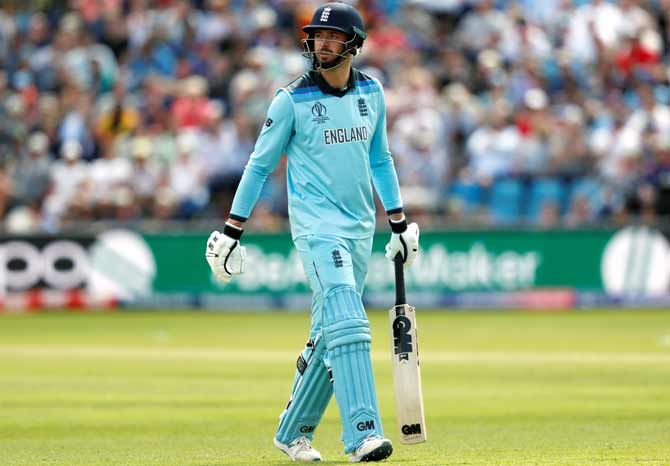 IMAGE: England's James Vince has not been able to make an impact in the 13 ODIs that he has played so far, scoring at an average of 24.09 with just one fifty. Photograph: Lee Smith/Reuters

Top-order batsman James Vince, who was part of England's World Cup-winning team, is hoping to make an impression during the three-match ODI series against Ireland starting on Wednesday.

Vince has not been able to make an impact in the 13 ODIs that he has played so far, scoring at an average of 24.09 with just one fifty.

With England missing the likes of Joe Root, Ben Stokes and Jos Buttler for the ODI series due to their Test assignment against the West Indies, Vince is hoping to grab the opportunity.

"I'm 29 now, so hopefully I've got a few years left in the tank. Obviously it's a very tough side to break into, especially when it's at full strength," Vince, who also played 13 Tests and 12 T20Is so far in his international career, told the PA news agency.

"It's not always that easy when I'm in and out, but hopefully I'll get a bit of a crack in this series," added the 29-year-old, who scored an unbeaten 66 for England Lions against Ireland on Sunday.

Vince was included in the World Cup squad in place of injured Jason Roy but failed to make a mark in the three World Cup matches last year.

English cricket currently boost of a solid ODI line-up with lot of quality batsmen and bowlers waiting for a chance to break into the team.

"There's certainly a lot of good players – batters and bowlers – coming through, so for English cricket overall, it's pretty positive signs," Vince said.