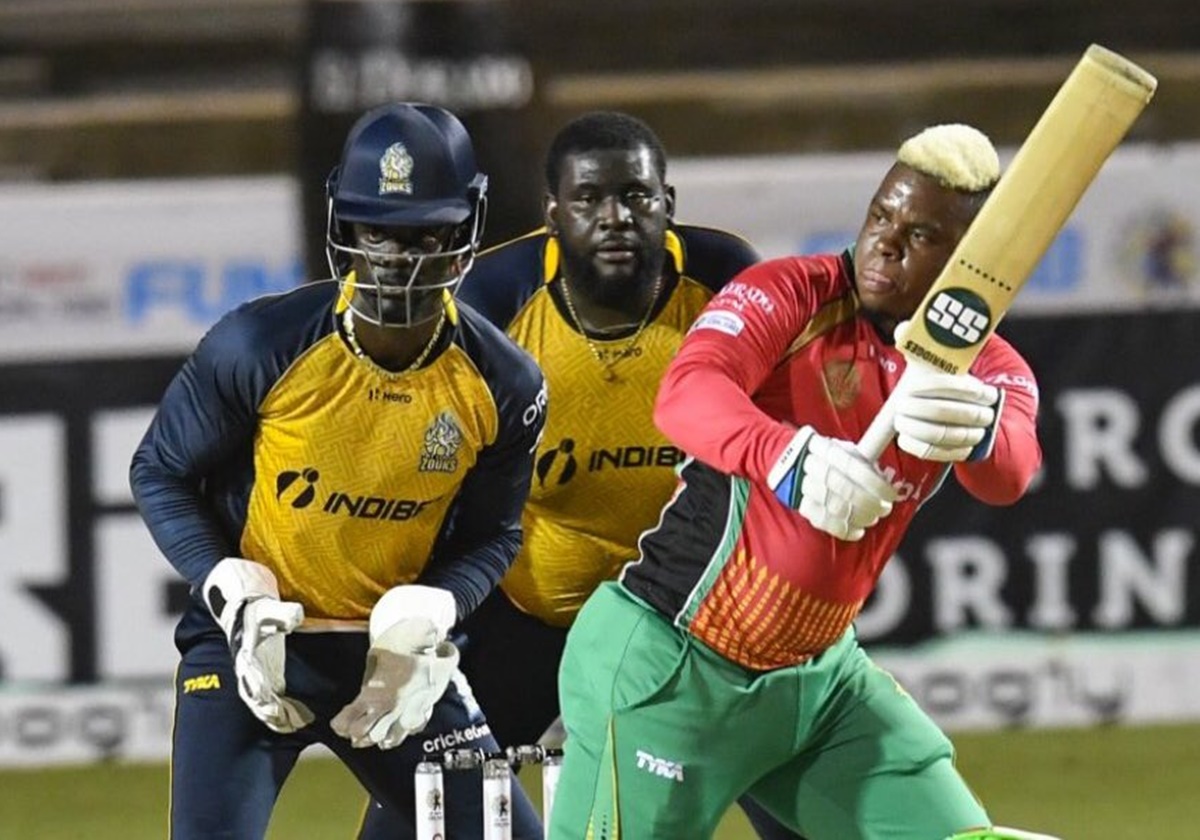 Opener Lendl Simmons blasted a 63-ball 96 as Trinbago Knight Riders put their might on display yet again, outplaying St. Kitts & Nevis Patriots by 59 runs to secure their eighth successive win in the Hero Caribbean Premier League in Tarouba.

In the other match, Guyana Amazon Warriors crushed St. Lucia Zouks by seven wickets to jump to the second place in the points table.

With Knight Riders resting their star players Kieron Pollard and Sunil Narine, Simmons got into the act and smashed seven fours and six maximums to single-handedly power the team to 174 for 4. Darren Bravo (36) was the only other batsman to reach double figures.

TKR lost other opener Amir Jangoo (6) early and Colin Munro (9) was retired hurt after being hit on the hand with the total being 29.

Simmons was severe on all bowlers even though Jon-Russ Jaggesar and Dominic Drakes managed to keep the Knight Riders boundary-less between the Powerplay and halfway drinks when they were 68 for one.

Bravo ended a 35-ball streak without a boundary. Simmons too broke free, pulling Rayad Emrit for another six, before bringing up 50 off 42 balls with a single. That set the stage for a dash as the Knight Riders were 125 for 1.

Bravo also hit Drakes for six, bringing up the 100 partnership off just 66 balls.

Simmons pulled another six and Bravo smashed a four through extra-cover, making the 16th over highly productive.

Alzarri Joseph started the 18th well but Simmons bludgeoned two sixes to get into the 90s and the team past 150.

Sheldon Cottrell finally got Bravo in the 19th over and Drakes got two wickets in two balls in 20th when Simmons, four short of a century, pulled to Cottrell and Tim Seifert's edge was well caught by Lynn.

Defending the total, Khary Pierre dismissed the dangerous Evin Lewis (5) caught by the 48-year-old Pravin Tambe for an athletic catch.

Chris Lynn (34) and Joshua da Silva (29) each hit a six off Pierre, with the latter also sweeping him for four, but even an over of 18 only took the Patriots to 34 for one after six overs.

Tambe and Anderson Phillip then tightened the screw as the Patriots needed almost 12 an over at the halfway mark.

Tambe bowled four overs for 12 and took one wicket, making it an uphill task for Patriots. Raza returned with figures of three for 8 runs as Patriots could manage only 115 for seven.

In the other match, Shimron Hetmyer (56) smashed an unbeaten fifty while the bowlers turned in another fine performance as Guyana Amazon Warriors outplayed St. Lucia Zouks by seven wickets with more than six overs to spare.

Put in to bat, Rakheem Cornwall hit two sixes and two fours in a 13-ball 21 but none of the batsmen could consolidate on starts as Zouks laboured to a lowly 109 for 7 in 20 overs.

Even the normally dependable Najibullah Zadran (19) and Mohammed Nabi (13) were unable to haul them out of trouble. The steady Naveen ul Haq and Keemo Paul took two wickets each.

Chasing the total, the Warriors were aided by Scott Kuggeleijn who sprayed wides on both sides in a nine-ball first over. The bowler, however, returned to dismiss Brandon King (5).

Chandrapaul Hemraj and Hetmeyer then took them to 58 for 2 when Nabi cleaned up the former.

Hetmeyer and Nicholas Pooran (10) then ensured it was smooth sailing.

Hetmyer attacked Chemar Holder mercilessly, pulling his first two balls for sixes and following up with three fours in a row including a majestic cover drive, a square cut and a punch over mid-off as Warriors zoomed to 82 for two in 10 overs.

The 24-run over had reduced the easy chase to a stroll in the park.