Commentary on back burner as Karthik eyes India comeback

'I've done commentary only once and that was post IPL when I had two months break. I've realised that I enjoy it. But it's not something that I'm in any way pursuing for the next three years in a serious manner.' 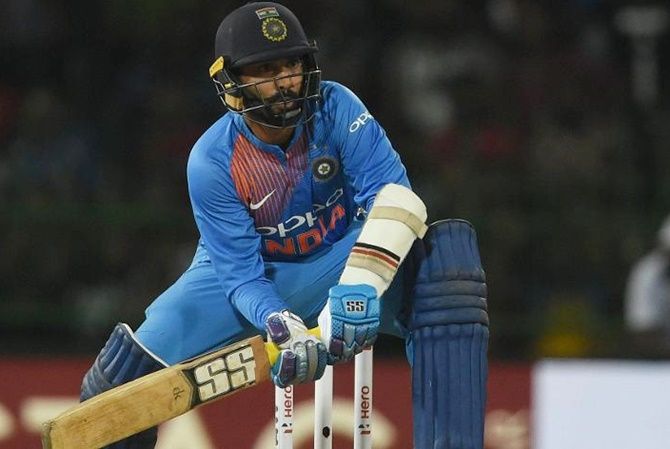 Dinesh Karthik is currently putting in the hard yards in Mumbai under the guidance of friend and mentor Abhishek Nayar, focussed on sharpening his finishing skills in the T20 format.

Not because the IPL auctions are around the corner. His plan is simple.

The 36-year-old, who last played for India in the 2019 ODI World Cup semi-final, is committed to playing the game for "another 3-4 years" and is determined to make a national comeback in the shortest format.

The motivation to play for India remains as strong as ever, says Karthik who would also want his six-month old twin boys to see him playing at the highest level a couple of years down the line.

"T20s will be the starting point for me. Obviously with a tournament like the IPL, you play against the best in the world and you get an opportunity to showcase your skills. As a middle order batter, I can try and create an impact," Karthik told PTI.

Before being dropped from the shorter formats in the aftermath of an ill-fated World Cup campaign, Karthik had done reasonably well as a finisher in T20s with the highlight being his last over heroics in the 2018 Nidahas Trophy final.

With India continuing to try out players for the middle-order in limited overs cricket, Karthik senses an opportunity.

Citing the examples of Shikhar Dhawan, who is 36, and Pakistan's Shoaib Malik and the recently-retired Mohammad Hafeez, who both have touched 40, Karthik said age is not a criteria for selection anymore.

It is all about form, fitness and experience.

"Age is definitely not the thing that a lot of normal people look at it (for India comeback). Shikhar Dhawan was the highest run getter (in ODIs in South Africa) and we are the same age."

He also believes that in the shortest format one tends to get better with age.

"People tend to figure out, understand their body, the amount of cricket they can play and all of those reasons, like a big example was the way you know Shoaib Malik and Hafeez were able to contribute to Pakistan in the T20 World Cup.

"Experience is a very important factor in multi-nation tournaments. You could see that very evidently in the last few tournaments that have been held."

Talking about his T20-specific training with Abhishek, Karthik said he is working on skills that make him better at the start of the innings.

"After every tournament, we sit down and reassess. After the Vijay Hazare (domestic one-day event), we sat down and figured out a couple of areas that we need to improve upon in terms of shot making.

"As soon as I enter within the first five balls, what are the kind of scoring opportunities that I can create for myself. When a fast bowler obviously comes on and tries to bowl into you, what are the opportunities in terms of shot-making that you need to pick?

"Another area is that if a spinner is bowling hard lengths and trying to take the ball away from you, then what are the kind of opportunities you can give yourself to score?

"So I have taken a microscopic view to work on those areas," said Karthik, who is also regularly playing domestic cricket and did well in the one-dayers for Tamil Nadu.

Indian wicketkeeper-batters have usually been in demand in the IPL auction and Karthik, who is back in the auction after a long association with Kolkata Knight Riders, can once again land a lucrative deal.

He has played for as many six IPL franchises but not the team belonging to his hometown -- Chennai Super Kings.

"It's very hard for me to answer this question because it will be a very cliched answer. I'll try and do everything that I can, not only to do well for the franchisee I play for but for myself also."

On the possible 'homecoming' with CSK, Karthik added: "Look, it's great if I can play for CSK. I'm from Chennai.

"But at the end of the day, what's important for me is whichever team that I get to play in, it will be an absolute honour because as I said, all this practice that I've been doing these days is to try and do well in a tournament like the IPL."

Karthik the commentator became an instant hit with his debut in the UK during India's tour of England and the World Test Championship final.

While he still does a bit of media work in his free time, Karthik insists his commentary stint in the UK was a one-off and all his focus is on the India comeback.

"I've done commentary only once and that was post IPL when I had two months break. I've realised that I enjoy it. But it's not something that I'm in any way pursuing for the next three years in a serious manner.

"For me playing the sport is the most important thing and I've set a target to play at least for the next three to four years.

"Most important thing for me would be to play the sport and do as well as I can because I can always be a commentator once I hang up my boots, but I can't keep playing for a long time," Karthik added.