'When he was selected for the West Indies tour, I only told him don't do anything different. The way you have bowled in the Ranji Trophy till now, the same way you have to bowl.' 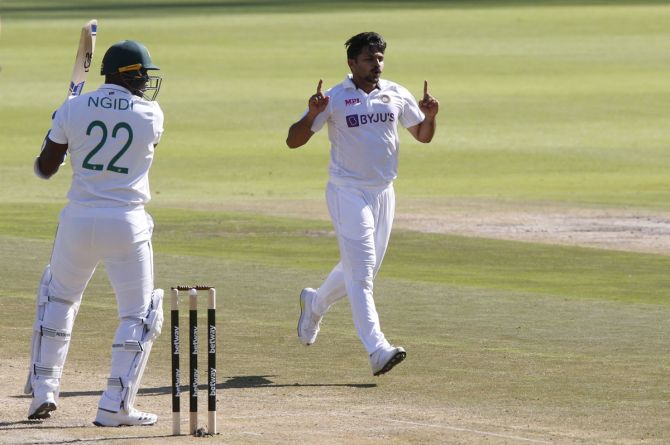 From handling the frustration of not being played by his IPL franchise to a career-best seven-wicket haul in Test cricket, Shardul Thakur has come a long way, but his childhood coach, Dinesh Lad, says he never really had to do anything special to mould the driven all-rounder except for "working on his mental strength".

Shardul returned fine figures of 7 for 61, his best bowling figures in Tests, as India bundled out South Africa for 229 on Tuesday, the second day of the second Test, at the Wanderers in Johannesburg.

It was Lad with whom 'Lord Shardul' or 'Palghar Express', as he is fondly called now for his reputation as a partnership breaker, stayed with in Mumbai during his formative years.

"I did no specific work with him, but (I worked) on his mental strength. I remember when he was taken for the IPL, and he didn't play for Kings XI Punjab (now Punjab Kings), he would be frustrated and say 'they don't play me'.

"I used to tell him it's okay, they have selected you and it is important for you to practice with bigger players," said an elated Lad.

The 30-year-old made his Test debut against the West Indies in October 2018, but had to wait long for his next chance.

Lad, who is also the childhood coach of India's white-ball captain Rohit Sharma, had only a bit of advice for Shardul after he made the national breakthrough -- "don't do anything different".

"When he was (first) selected for the West Indies tour, at that time I had only told him don't do anything different. The way you have bowled in the Ranji Trophy till now, the same way you have to bowl," he recalled.

"You have now become big (and) at that moment you will do something different and that will affect your bowling. Better way, do the same things, by which you have grown up and he kept listening (to the advice)," revealed Lad, one of the finest coaches in the domestic circuit.

Shardul, apart from being a pacer, is now also a handy batter who can chip in with much-needed runs, as he showed at the Gabba in Brisbane last year against Australia and Lad remembered how he worked on his grip.

"I changed his top-end grip and he benefited from it. But he worked on it; he understood what I was saying and he worked on it. He was a hard-hitting batter, but once he started playing with a straight bat, he got to know that he could stay on the wicket and do anything," recollected Lad.

Shardul, who has now played in all three formats for India and is a regular member of the national team, hails from Palghar, but it was on the insistence of Lad that he stayed at his Mumbai residence.

"When I saw him, he played in a match against my school; after that I insisted that (he should stay with me) as travelling was an issue. I convinced my wife about Shardul staying at our place.

"One thing I am proud of is that I knew that this kid would do wonders and hence I kept him at my place," added Lad.

"Had I not taken that decision at that time, maybe Shardul would have played there (in his hometown). My vision was if this boy came to Mumbai, he would play big cricket and since it was fulfilled I was elated."

Lad, the father of Siddhesh Lad, also a well-known name in the domestic circuit, said that Shardul was talented and he kept motivating him.

"Shardul justified his talent. Had I not brought him to Mumbai, no one would have seen Shardul."