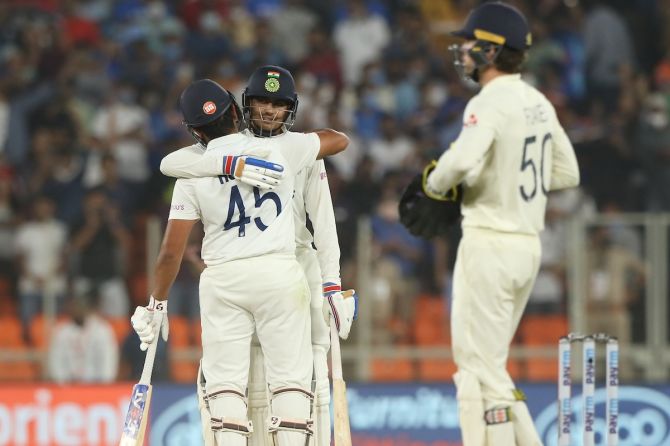 India registered only their second Test victory inside two days, overhauling a meagre target of 49 against England in the day-night third match of the series to take an unassailable 2-1 lead, at the Narendra Modi stadium, in Ahmedabad, on Thursday.

England's previous Test loss inside two days was way back in 1921 against Australia.

There was no end to England's batting woes against the spin duo of Axar Patel and Ravichandran Ashwin as the side folded for 81 in its second innings.

This was the team's lowest Test total against India.

Openers Rohit Sharma (25) and Shubman Gill (15) then completed the formalities in 7.4 overs, barely half an hour into the final session of the day.

Earlier, Axar picked five wickets in England’s second essay, adding to his outstanding haul of six in the first innings. His bowling effort is the best in a pink-ball match.

Ashwin went on to add four more wickets to his first-day spoils of three scalps to cross the 400-wicket mark in the longest format.

In the afternoon session, India's first innings folded for 145 with opener Rohit Sharma top-scoring with a 66-run knock. England captain Joe Root returned career-best figures of 5/8 for his team.

Check out the Tests which ended on Day 2 with a result before India's win over England in the day-night third Test in Ahmedabad.

14) South Africa vs Australia in Johannesburg on 15 Feb 1936: Australia won