'We are writing to respectfully ask you to abandon the Adani Group's proposal in Queensland's Galilee Basin...Pollution from burning coal was the single biggest driver of global warming, threatening life in Australia, India and all over the world' 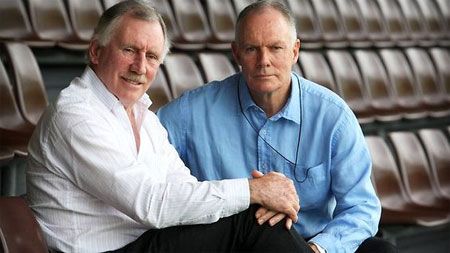 Cricket legends Ian and Greg Chappell and other prominent Australians in an unusual move have written to Indian energy giant Adani to abandon its controversial coal mine project in Queensland, warning it could damage bilateral ties and even hit sporting links.

The 21.7 billion dollar Carmichael coal mine project, one of the world's largest, was to start construction this year after being given the green light by the federal and Queensland state governments.

The project involves dredging 1.1 million cubic metres of spoil near the Great Barrier ReefMarinePark, which will then be disposed off on land.

The open letter addressed to Gautam Adani, the company's founder and chairman, cites public opposition, risks to miners' health, climate change and potential impact on the fragile Great Barrier Reef as reasons not to proceed.

"Cricket has a bit to do with the feeling between India and Australia," said Ian Chappell.

"The thought that this [mine] could affect the relationship, hopefully that'll get through."

The letter calls on Adani to invest in renewables instead, and concludes that it would be a "great shame" were the mine to "damage the image of India in Australia".

The letter is expected to be delivered to Adani's Gujarat headquarters by an Australian community delegation currently visiting India.

The letter said, "We are writing to respectfully ask you to abandon the Adani Group's proposal in Queensland's Galilee Basin...Pollution from burning coal was the single biggest driver of global warming, threatening life in Australia, India and all over the world."

"Last month The Lancet, one of the world's leading medical journals, published a report that described your company's Carmichael mine proposal as a public health disaster...this mine proposal does not have wide public support in Australia and does not have the support of the Traditional Owners of the land where the mine would be dug.

"There are concerns about the impact the mine will have on groundwater resources and on nearby farmers who rely on this water for their livelihoods," it noted.

"We urge you to think about global warming and public health and listen to the wishes of the people. It would be a great shame if this one project were to damage the image of India in Australia.

"We understand the Adani Group has not made a final investment decision on the Carmichael coal mine. We strongly urge you to decide to abandon this project.

"We the undersigned -- and we believe all Australians - would support and welcome moves by your company to invest further in renewable energy in Australia," the open letter said.