India captain Mahendra Singh Dhoni refused to break the Board of Control for Cricket in India’s gag on him in answering questions on the spot-fixing scandal that hit the just-concluded Indian Premier League, except to say that some players are "slightly mentally weak" compared to others.

Addressing a press conference in Birmingham on Thursday, ahead of the Champions Trophy, he made it clear that he would not answer questions relating to the recent controversies, saying he will definitely speak at the right time.

An ICC official reminded the journalists gathered that the interaction should be limited to the Champions Trophy, much like the Indian team media manager's intervention during the pre-departure press conference in Mumbai on Tuesday. 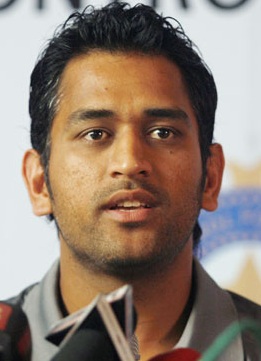 Dhoni had come under severe attack from media and commentators for his silence in refusing to answer questions at the Mumbai interaction.

"If I have not answered Indian journalists, there is no reason why I should answer you… at the right time (I will speak)," he said, in reply to a question by a reporter, who asked him about the spot-fixing scandal.

Asked if the Champions Trophy is an opportunity to "restore the reputation" of Indian cricket, Dhoni said, "It is not that the reputation has gone. If I go ahead to explain that I would rather answer his question also. When the right time comes, I will answer it.

"As of now, I don’t think we have lost the opportunity because whatever the set-up is throughout the world or any sport, still you have some people who would be slightly mentally weak as compared to some of the others. I would have loved to elaborate but at the right time I will do it", he said.

Pressed further on the issue, Dhoni said, "Well, you are just forcing me to answer, but, definitely, when the time comes I will answer.

The conference then proceeded thusly:

Imagine if you win the Champions Trophy, the faith of Indian fans will be restored?

Well, I know one thing I am a person who lives in the present, I don't really believe in imagining. I believe in doing the stuff right.

Expand on it, do you look the same cool, relaxed guy as you have been over the years?

You are just forcing me to answer a few things, but, definitely, when the time comes I will answer that. Just want to keep our side away from everything as of now.

Asked about the team spirit, he said "it was fantastic".

On Wednesday also Dhoni avoided a series of questions on the spot-fixing episode. Like these:

As the leader of Indian cricket fraternity, why we have not heard from you so far?

Can you guarantee Indian cricket fans that during Champions Trophy there will be no mischief on the field?

Has there been an impact on the players going for Champions Trophy?