Skipper Gautam Gambhir and Jaques Kallis scored at a brisk pace to ensure that Kolkata Knight Riders beat Warriors by 22 runs via Duckworth/Lewis method in the Champions League group B match at the Chinnaswamy stadium on Saturday.

Chasing a target of 156, KKR were 83 for one after nine overs when heavens opened. The D/L par score at that time was 61 for one and KKR were well ahead courtesy Gambhir and Kallis.

Earlier, the first game between Somerset and South Australia Redbacks were abandoned with out a ball being bowled due to the rain.

KKR were off to blazing start getting 58 runs in the first Powerplay. After losing opener Manvinder Bisla (19), KKR were back in the hunt with Kallis and Gambhir, adding the firepower to propel the team into safety, stitching an unbeaten 33-ball 48 run partnership for the second wicket stand.

Gambhir was dropped by Kelly Smuts on 21 off Johan Botha while Kallis was on 15 when wicketkeeper Mark Boucher dropped him.

After being put into bat, Warriors set a decent target 155, courtesy half century from Collin Ingram.

Warriors made the best use of the conditions, with their top-order, clobbering the Kolkata bowlers. Ingram and JJ Smuts stood tall as Warriors recovered from an early loss of Ashwell Prince (4), who departed at 15.

Ingram sizzled with his 47-ball 61 while he bloomed in the company of Smuts, who was equally brilliant with a 43-ball 46 as the second wicket pair stitched a 61-ball 80 that bailed the team from early jitters.

Ingram's innings was studded with three hits to the fence and three over it as the southpaw snatched his maiden fifty in this edition of the tournament.

Kallis gave Knight Riders the perfect breakthrough, dismissing Ashwell Prince for 4, who showed some flashes, opening his innings with a powerful boundary.

He dismissed Smuts when the right hander attempted to pull a short ball saw Iqbal Abdulla gleefully accepting it at mid-off and ducked Creg Thyssen.

Smuts, who made a 75-ball 88 against South Australia Redbacks in the previous game, matched his partner Ingram stroke for stroke, hitting four boundaries.

Curtain came down on Ingram's innings when he was pouched by Iqbal Abulla off pacer Brett Lee. Towards the end, wicket-keeper batsmen Mark Boucher (36) played a little cameo as the right hander added 46 runs from 39 with Ingram for the third wicket stand.

Wicket-keeper batsman Brad Haddin, who developed a hamstring injury was rested with Manvinder Bisla donning the gloves for Kolkata.

Somerset-Redbacks tie abandoned because of rain 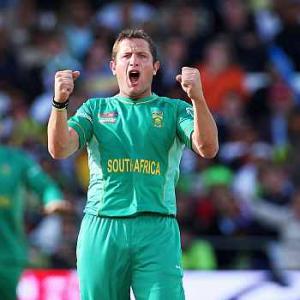