Sialkot Stallions will go back home with some pride as they beat Hampshire by six wickets in their inconsequential Pool 1 qualifying match of the Champions League Twenty20 tournament in Johannesburg.

It was a dead rubber since both the teams have already been eliminated. Auckland Aces had qualified for the main draw from Pool 1 after defeating both Hampshire and Sialkot in the earlier matches.

Stallions did a good job by restricting Hampshire to 143 for eight after electing to bowl and then overcame a poor start to overhaul the target with five balls to spare.

The Pakistan domestic T20 champions were playing in the CLT20 tournament first the time but could not qualify for the main competition.

It was Glenn Maxwell's quick-fire 42 off 29 balls and his 56-run partnership with Shahid Afiridi (14) that had lifted the English County team to a decent total from a miserable 66 for four in 11 overs.

Hampshire bowlers raised hopes of win by getting three quick wickets, reducing the rivals to 28 for three in seven overs but Malik and Sohail steadied the innings.

They took time to settle down as the ball was doing a bit for the bowlers and gradually shaped and paced the innings.

Stallions had lost both the openers -- Imran Nazir (0) and Shakeel Ansar (15) inside fifth over. Nazir was castled by spinner Liam Dawson in the very first over while Ansar was scalped by David Griffiths.

Shahid Yousuf (3) was brilliantly caught by Maxwell at point off Chris Wood and Stallions were struggling at 28 for three in seven overs.

Malik together with Sohail repaired the innings well before being stumped off Afridi at the start of the 18th over.

Sohail, whose knock came off 57 balls with eight fours and a six, though completed the job by staying till the end.

Earlier, the pitch had both bounce and turn and the Pakistani bowlers made life tough for the English County side.

Opener James Vince (18) looked in good touch as he hit Asif for three consecutive boundaries in the second over but the flourishing start was squandered since a terrible mix up with Michael Carberry (11) resulted in his run out.

Malik (1/15) then removed Carberry, whose miscued shot landed in the hands of short fine-leg fielder. Malik could have got a second wicket but he dropped Sean Ervine in his follow through.

Ervine, though could not cash in on that dropped chance and he too became a run out victim when he went for a non-existent second in Malik's next over.

The pitch had both bounce and turn and Sarfraz Ahmed and Naved-ul-Hasan bowled a very hostile spells of fast bowling as Hampshire managed just 59 runs on board at half-way mark.

Out of frustration, Adams (14) went for an extravagant shot, a reverse sweep off spinner Raza Hasan, but missed the lined completely and was adjudged leg-before.

Maxwell took on the left-arm paceman Ahmed, lofting him for a six and a four in the 12th over and then launched Naved for two consecutive sixes, lifting the gloom.

However, he and Afridi could not provide the finishing touches to their innings.

The two batsmen departed in successive balls in the 16th over while launching into paceman Umaid Asif.

Asif was the most expensive bowler, leaking 42 runs in his four overs but others were economical. 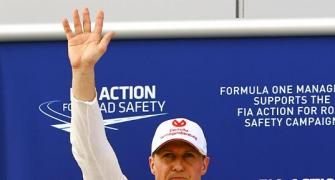