ODI series defeat is not something very serious to ponder about, says Chahal 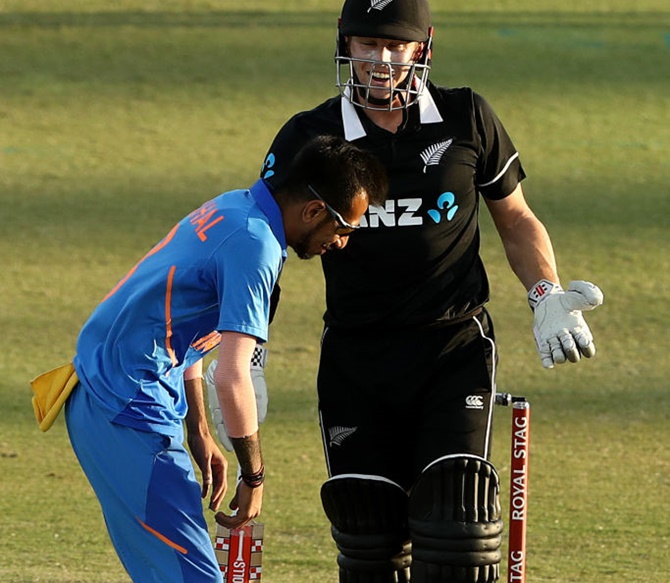 IMAGE: Yuzvendra Chahal was all praise for the hosts but admitted fielding is a concern for India. Photograph: Hannah Peters/Getty Images

India have been so consistent in the last five years that the ODI debacle against New Zealand is not worrying, leg-spinner Yuzvendra Chahal said on Tuesday, playing down the rare series-whitewash the Black Caps inflicted on them.

The Kiwis won the third ODI by five wickets to complete a 3-0 clean sweep in Mt. Maunganui.

"Overall, if you see it is just the fourth or fifth series loss in the last 4-5 years. The other team is also here to play. You cannot win every match. We have won one series, lost the other, so it is not something too serious to ponder over," Chahal said at the post match press conference.

He said the youngsters will learn a lot from the experience of playing in New Zealand.

"Prithvi Shaw and Mayank Agarwal came into the side, so youngsters got to play outside India. It is not easy to play in New Zealand. But overall if we see, it is just an ODI series. We did win the T20 series 5-0, first time, that's a positive for us as well," added Chahal.

"You can see the confidence in them. They are 25-26 years old and batting with maturity. They understand the situation well. It is not easy to bat in the middle overs especially when the spinners are bowling. Rahul has also batted up the order at times. So, it shows the maturity that he knows what the team needs," he said.

Chahal was all praise for the hosts but admitted fielding is a concern for India.

"They have played quite extraordinarily in this series. So we need to appreciate that. Poor fielding happens at times. Once in 10 series it happens, we have time until the next ODI series. We have seen what are the shortcomings and we have enough time to work on it before the next series," he said.

When asked why he and Kuldeep Yadav have not played together since the World Cup, he said, "Ravindra Jadeja is playing extraordinarily well, whether it is batting or bowling or fielding. So, I play half the matches and Kuldeep plays half the matches."

"Main motive is to do what is best for the team. In Asia Cup all three of us have played together as well. If wickets allow that, maybe all of us will play together again.”

The leg spinner did finish with 3-47 in his ten overs, and his regular strikes created a chance for India to win. He bowled Martin Guptill with a beauty, but was taken off the attack every time he took a wicket. Chahal defended it as a ploy.

"Guptill dismissal was one of my best deliveries. Before that I was getting a lot of drift as well and hit their pads. I came from an angle. I didn't know it would turn so much but I was bowling in my strong areas.

"Short spell was part of our plan. Jadeja also has to bowl and we are only two spinners. So our effort is to take the wickets and when I got it, the idea was to save 2-3 overs for the end and make chances for taking wickets," he explained.

Chahal said playing eight limited-overs matches in a span of 22 days after a hectic home season was not a factor in their defeat.

"The main exertion happened in T20s. We didn't care much about jetlag etc., and got on the park to play. We gave 100 per cent in every game. We are professional cricketers so we didn't think much about it," Chahal signed off.