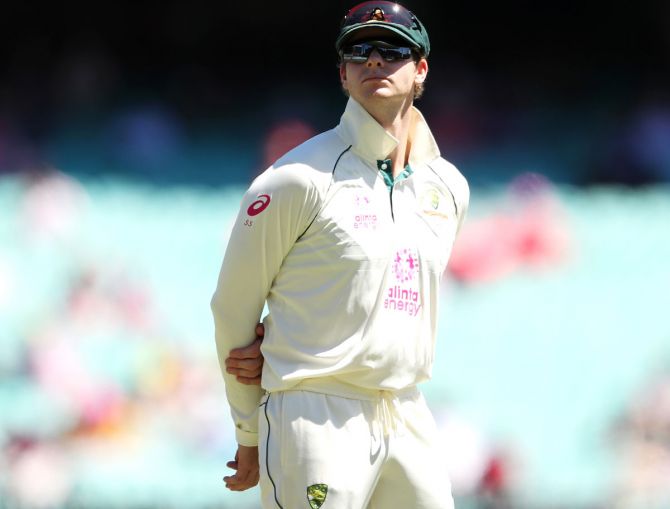 IMAGE: Steve Smith was caught on the stump cam scraping the pitch at the same spot where Rishabh Pant had marked his guarding while batting, on Day 5 of the third Test in Sydney. Photograph: Mark Kolbe/Getty Images

Australia batsman Steve Smith was slammed on social media for scuffing the wicket with his foot in an attempt to remove Rishabh Pant's guard marks at the crease, on Day 5 of the third Test in Sydney on Monday.

After the drinks break, Smith was caught on the stump cam doing some shadow batting practice before he resorted to scraping the pitch at the same spot where Pant had marked his guarding while batting.

It could have been a ploy by the Australian to distract Pant as the hosts got a bit frustrated on the final day as India staged a remarkable fightback to draw the third Test at the SCG, and keep the series level at 1-1.

Pant had briefly raised India's hopes of pushing for an unlikely victory in the morning session when he stroked a brilliant 97 from 118 balls, hitting 12 fours and three sixes. At the other end, Cheteshwar Pujara was as solid as ever, scoring 77 from 205 balls with the duo putting on 148 runs for the fourth wicket to rally India after the early dismissal of captain Ajinkya Rahane (4) in the morning session. Smith, who was named man of the match for his century in the first innings, was branded as 'cheat of the match' by some fans on Twitter.

"Tried all tricks including Steve Smith trying to remove Pant's batting guard marks from the crease. Par kuch kaam na aaya. Khaaya peeya kuch nahi, glass toda barana (but nothing worked). But I am so so proud of the effort of the Indian team today. Seena chonda ho gaya yaar (my heart is swelling with pride)," tweeted former opener Virender Sehwag.

"#SteveSmith once a cheater always a cheater..." tweeted STR and Md Meraj Samani.

"steve smith at it again, blatant cheating... when will he learn? great batsman but empty in the head," tweeted Scott.

"@ICC take action against @stevesmith49 for cheating. We thought he was guilty of his cheating but he is not. Cheating again & again have no excuse," Sanjay Gadiyar said on Twitter.

It remains to be seen if the International Cricket Council takes action against Smith for his actions.

If Smith's conduct is deemed as 'unfair play' as per clause 41 of the ICC Standard Test, ODI and T20I Playing conditions he could face punishment under section 2.10 for 'causing deliberate or avoidable damage to the pitch'.