India 'A' skipper Cheteshwar Pujara (67) stood tall amid the ruins after his West Indies 'A' counterpart Veersammy Permaul wrecked the visiting line-up with a five-wicket haul on the second day of their second unofficial cricket Test in Kingstown on Sunday.

India 'A' top-order once again flopped as the side folded for 202, giving the hosts a vital 15-run first innings lead.

In reply, the West Indies 'A' were 6 for no loss in their second innings with openers Kraigg Brathwaite (4) and Justin Guillen (1) at the crease before draw of stumps. 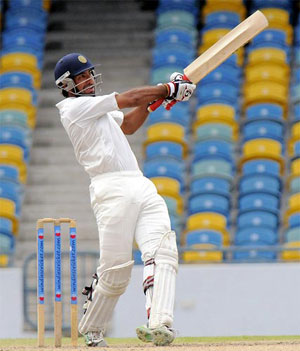 It was yet another shambolic batting performance by the Indians as Permaul quite literally ripped through the middle order to notch up figures of five for 58 at Arnos Vale.

Earlier, India 'A' wasted little time at the start of the day, wrapping up the Windies innings with the hosts adding just five to their overnight 212 for eight before being dismissed.

Brathwaite, unbeaten on 66, was bowled by seamer Shami Ahmed (4-48) without adding to his score and Devendra Bishoo followed soon afterward, trapped LBW by the same bowler for two.

But the visiting side's response was hardly any better as they plunged to 12 for two before Pujara and Ajinkya Rahane stitched up a face-saving 74-run third wicket stand. PTI The right-handed Pujara faced 156 balls in 170 minutes, hitting six fours and a six while Rahane got 18.

Pujara, like the first match in Barbados last week, played superbly and brought up his half-century with a six over long-on off leg-spinner Bishoo.

Permaul then struck twice to bring West Indies A back into the game.

He had Rahane taken at slip by Delorn Johnson to claim his first wicket at 86 for three and within two runs, he induced a return catch off Rohit Sharma to send the batsman on his way back to the pavillion for one.

Pujara and Manoj Tiwary then put on 27 for the fifth wicket before both fell in quick succession. Once again, it was Permaul who was in the forefront, having Pujara caught behind attempting to pull one that bounced.

Struggling at 123 for six, India were then boosted by two successive partnerships as Wriddhiman Saha (20) and Rahul Sharma (30) added 38 for the seventh wicket before Sharma and Shami Ahmed (20) put on a further 32 for the eighth wicket.

But the Caribbeans have the edge going into the penultimate day of the match.