A new captain in the saddle, Kolkata Knight Riders would look to sort out their batting woes and strive for consistency when they face Sunrisers Hyderabad in an intriguing mid-table Indian Premier League clash, in Abu Dhabi, on Sunday.

After a string of below par performances, Dinesh Karthik handed over the reins to his deputy Eoin Morgan hours before KKR's match against Mumbai Indians on Friday. But the World Cup-winning England captain's campaign as leader got off to a disappointing start with Mumbai Indians handing KKR an eight-wicket mauling.

KKR are still in the top four of the IPL points table behind Mumbai Indians, Delhi Capitals and Royal Challengers Bangalore with four wins and as many defeats. But if the two-time champions want to seal a play-off spot, their batsmen need to step up, shrug off their inconsistencies and win matches for the team. 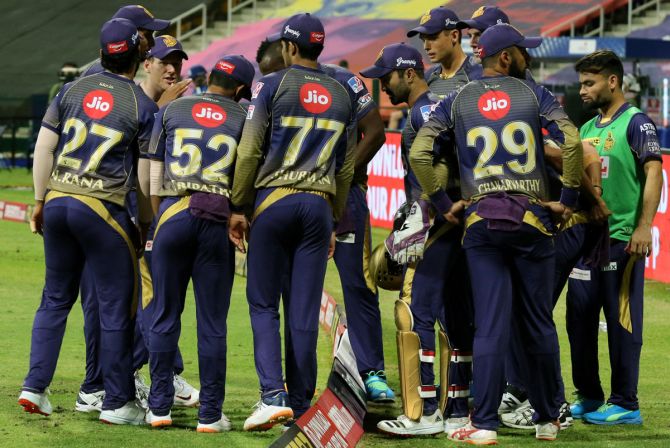 IMAGE: KKR are fourth in the points table with four wins from eight games. Photograph: BCCI/IPL

After a massive 82-run loss to RCB, the KKR batsmen failed yet again against Mumbai's bowlers as they were reduced to 42/4 in the eighth over. It was only the 87-run unbroken stand for the sixth wicket between Morgan (39 not out) and pacer Pat Cummins (53 not out) that helped KKR post a respectable 148 for 5.

Mumbai cruised to victory as they needed just 16.5 overs to overhaul the target, losing two wickets in the process.

For KKR, opener Shubhman Gill has failed to capitalise on his starts, while Rahul Tripathi has not gone past the 20-run mark after his brilliant 81 against the Chennai Super Kings.

Nitish Rana has been profligate and Karthik's batting slot has been experimented with throughout the tournament. Andre Russell and Morgan have also not been able to make the kind of impact expected from players of their calibre.

The KKR bowlers did well to fashion narrow victories against Kings XI Punjab and Chennai Super Kings, but leaked runs against Royal Challengers Bangalore and Mumbai. To add to their woes, star spinner Sunil Narine has been reported for suspect bowling action and he has missed two matches since then. The Sunrisers, who occupy the fifth spot on the points table with just three wins from eight outings, are also struggling. With the injuries ruling out pace spearhead Bhuvneshwar Kumar and all-rounder Mitchell Marsh, the Orange Army is facing a conundrum of whether to strengthen their batting or their bowling unit, a fact that skipper David Warner conceded.

A cause of concern for the Sunrisers is Rashid Khan's form. After returning impressive figures like 3/14, 0/12, 3/12, the Afghan leg- spinner remained ineffective in the team's last two losses.

Skipper Warner will desperately hope that his star spinner finds his mojo back which is imperative for the team's success.