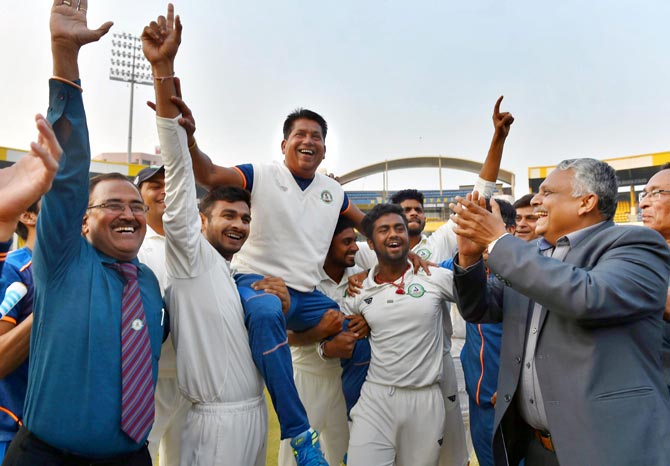 India's most successful journeyman domestic coach Chandrakant Pandit will take over as the new coach of Madhya Pradesh in the next season after completing three eventful years with Vidarbha in which they won back-to-back Ranji Trophy and Irani Cup titles.

In fact, Pandit during the final phase of his career played as a professional for Madhya Pradesh after successful time with Mumbai followed by Assam for a few years.

"After so many years, I am going back there. There are young players in MP, similar to Vidarbha. I am sure I will be able to do a good job as good as with MP," Pandit said.

The former India wicketkeeper said he prefers a stint of only two to three seasons with any domestic team.

"Three years I had done with Vidarbha because I think of spending time for two to three years (with a team). Whatever we did with Vidarbha, all the credit goes to players and of course the support I received from Prashant Vaidya and VCA president Anand Jaiswal. The players too responded well," recalled Pandit.

It is learnt that while the modalities of his contract are being worked out at the moment, Pandit is in all likelihood to get a period of two years.

The 58-year-old Pandit, a former domestic bulwark, has previously also coached Mumbai, Maharashtra and Kerala and is one of the most successful coaches in the domestic circuit. He was also the director of Rajasthan Cricket in the past.

For the past three years, he was with Vidarbha and of those, two seasons Vidarbha won the Ranji Trophy and Irani Trophy.