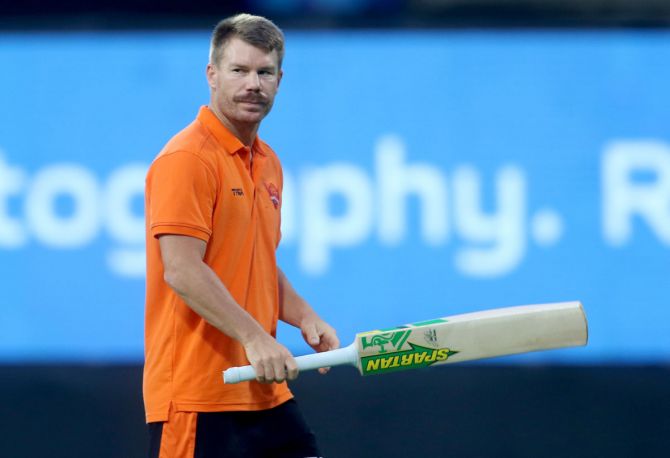 IMAGE: Sunrisers Hyderabad captain David Warner has scored just 93 runs from the three matches he has played so far with a highest score of 54 against Royals Challengers Bangalore. Photograph: BCCI

Bruised and battered after suffering defeats in their first three games, a desperate Sunrisers Hyderabad would seek inspiration from skipper David Warner to arrest any further slide when they take on Punjab Kings in an IPL match, in Chennai, on Wednesday.

SRH couldn't have asked for a worse start to the season as they slumped to three straight defeats, and in all occasions while chasing.

Punjab are a tad better than SRH, having registered one win out of three games to be placed at seventh in the standings, a rung above their Wednesday's opponents.

Chasing has been Sunrisers' achilles' heel so far in the league. They failed to get past a low score against Mumbai Indians in their last match.

SRH have been hit hard by the lack of depth in their playing XI and the below-par Indian bench strength.

In these circumstances, the onus rests on Warner to do some magic and inspire his side to bounce back in the tournament.

A big innings is due from the SRH captain as he has scored just 93 runs from the three matches he has played so far with a highest score of 54 against Royals Challengers Bangalore.

He also needs some serious introspection before deciding his playing XI for the clash against Punjab. 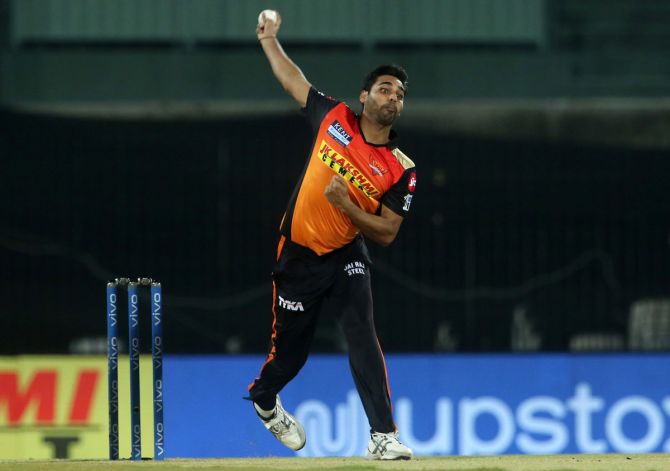 IMAGE: The experienced Bhuvneshwar Kumar has struggled with the ball, conceding at 10 runs per over for just two wickets in three games. Photograph: BCCI

Warner and Rashid Khan are certainties in the foreign players' slots, but the absence of Kane Williamson has been badly felt as he can provide solidity to the middle-order, especially after they faltered in three consecutive chases.

Going by Wridhhiman Saha's poor form he could make way for an Indian batsman, while Jonny Bairstow could take over the gloves.

But what would be troubling Warner most is the lack of depth in the team's local batting resources.

It's high time the likes of Manish Pandey, Vijay Shankar, Abhishek Sharma and Abdul Samad pulled up their socks as the likes of seasoned Kedar Jadhav and the young Priyam Garg are waiting in the wings for their opportunities.

SRH have also been hit hard by the below-par showing from their pace duo of Bhuvneshwar Kumar and Thangarasu Natarajan.

Natarajan, who was down with a niggle in is left knee, was replaced by Khaleel Ahmed in their last match and the latter did a good job to restrict Mumbai. However, the experienced Bhuvneshwar has struggled with the ball, conceding at 10 runs per over for just two wickets in three games.

Rashid has been economical (5.33) but didn't look menacing so far to claim four wickets in three games. 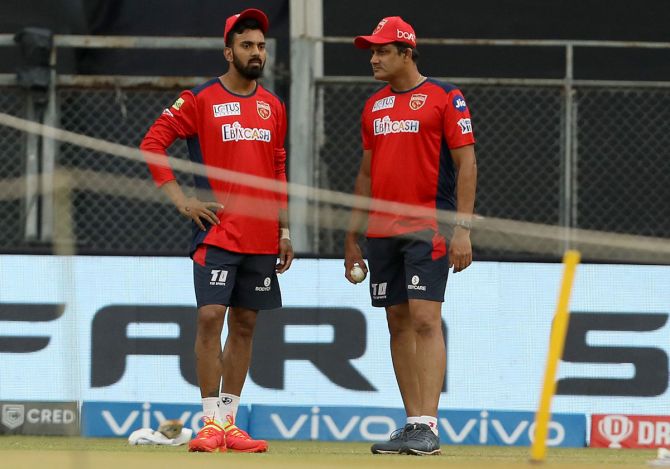 Punjab too are on a losing streak after the win in their tournament opener over Rajasthan Royals, suffering successive losses to Chennai Super Kings and Delhi Capitals.

After their  batting collapse against CSK, Punjab made a significant improvement and rode on skipper KL Rahul (61) and Mayank Agarwal (69) fifties to post a challenging 195/4 against Delhi.

But a below-par effort from their bowlers spoiled the hardwork of the openers.

Mohammed Shami has not been in his best form so far and leaked runs but what would be a concern for Rahul is the performance of Australian pace duo of Jhye Richardson and Riley Meredith.

Both Richardson and Meredith have been quite expensive, with an economy rate of above 10 runs per match in the first three games, and it is time for Rahul to think of other alternatives like Chris Jordan.

Young Arshdeep Singh has been impressive for Punjab with five wickets from three games at an economy rate of seven.