Buttler, Moeen not in favour of running out batters at non-striker's end 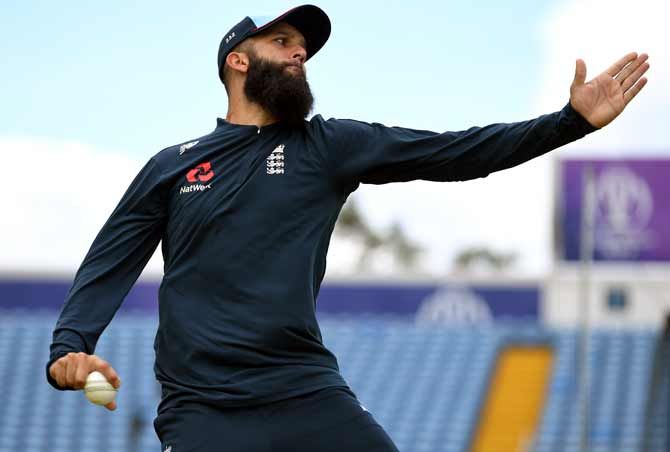 IMAGE: Jos Buttler and Moeen Ali said that running out a non-striker for backing too is not ‘their thing’. Photograph: Gareth Copley/Getty Images

England white ball captain Jos Buttler and his deputy Moeen Ali said that running out a non-striker for backing too is not "their thing" and that they would rather call the player back if any of their teammates used it as a mode of dismissal.

Custodians of the laws of cricket MCC have re-affirmed that a non-striker's run out while backing up is within the laws of the game but there has been no end to the debate in the aftermath of the third and final women's ODI between India and England where Deepti Sharma ran out Charlie Dean to complete clean sweep for visitors.

"No, I am calling the batsman back," the 32-year-old Buttler, who is recovering from a calf injury ahead of the World Cup, told TalkSPORT.

Incidentally, in IPL 2019, Buttler was at the receiving end as Rajasthan Royals opener when he was dismissed in a similar fashion by veteran Indian off-spinner Ravichandran Aswhin, who was back then playing for Kings XI Punjab.

"No one wants to see them (mode of dismissal) in the game because they always create such a talking point when it should be about the battle between bat and ball and watching great games of cricket. They always seem to happen at unsavoury times."

Moeen, the stand-in captain in their current T20I series against Pakistan, echoed similar sentiments: "No, it's not my thing."

"I don't think I'll ever do it unless I was really angry with someone. It's in the laws and there's nothing illegal so people that do it have the right, but I just hope it doesn't become a common thing, or something that's regularly done," Moeen told the Telegraph.

"You are not really working to get a wicket. At least with a run-out, there's a bit of work that has to be done, and with all the other dismissals. This is just waiting for the guy and taking the bails off. Even when I played cricket as a kid in the garden, it's not my thing to do."

The mode of dismissal currently listed in the MCC's 'Unfair Play' section of the laws (41.16.1) is to be moved to the 'Run Out' section from October 1, when an update to the ICC Playing Conditions comes into effect.

"Whilst (the dismissal) was indeed an unusual end to an exciting match, it was properly officiated and should not be considered as anything more," a statement from the MCC has said earlier.

"Where one person sees the bowler as breaching the Spirit in such examples, another will point at the non-striker gaining an unfair advantage by leaving their ground early."

While Indian skipper Harmanpreet Kaur has said that they have committed "no crime", Deepti on her arrival in Kolkata told reporters that they had "warned" Dean after she was repeatedly backing up at the non-striker's end.

England's captain Heather Knight, who pulled out of the series, later shot back accusing Deepti of "lying".