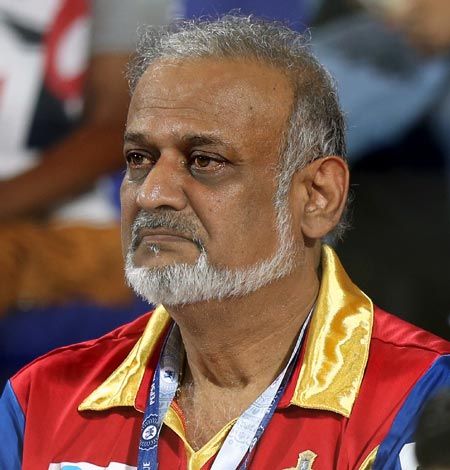 A day after the Supreme Court removed Board of Control for Cricket in India president Anurag Thakur and secretary Ajay Shirke for 'obstructing' the Lodha Panel reforms, Karnataka State Cricket Association secretary Brijesh Patel tendered his resignation along with president Ashok Anand and treasurer Dayanand Pai to fall in line with the reforms of the Justice Lodha panel.

The office-bearers tendered resignations in the light of the apex court setting out conditions based on Lodha Committee recommendations for their removal.

Interestingly, Patel's name was doing the rounds as one of the contenders to assume one of the top two posts in the BCCI, Cricket Association of Bengal president Sourav Ganguly being the other.

"The reason for Pai and Ashok tendering their resignations were -- they both were past seventy years, and Patel, who is 64 years, resigned because he had enjoyed positions beyond nine years in the state cricket association," KSCA Spokesperson Vinay Mruthyunjay said.

Patel, before holding the secretary's post, had previously occupied the post for nearly 12 years at a stretch which went against the age and tenure limit clause included in the sports code.

The Supreme Court had sacked Thakur and Shirke with immediate effect on January 2, holding that it was mandatory for the BCCI to implement the Lodha Committee recommendations on administrative reforms in toto.

The court had ruled that, for the time being, the senior-most vice president of the BCCI would act as the president and the joint secretary would carry out the Secretary's functions.