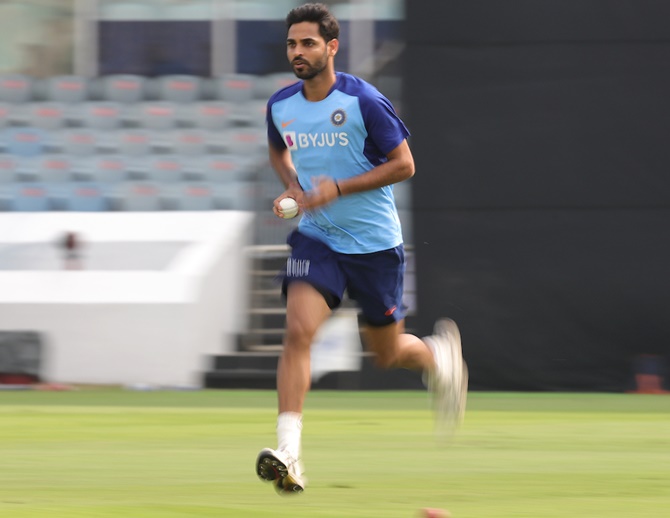 IMAGE: Bhuvneshwar Kumar was not named in the T20 squad for the upcoming tour of New Zealand due to the injury. Photograph: BCCI/Twitter

Injury-plagued Indian pacer Bhuvneshwar Kumar has undergone sports hernia surgery in London and will begin his rehabilitation at the National Cricket Academy after returning to the country, the Board of Control for Cricket in India said on Thursday.

The BCCI did not specify any timeline for his recovery, but it is learnt that he will return to action during the Indian Premier League, which is scheduled to start on March 29.

Bhuvneshwar plays for Sunrisers Hyderabad in the T20 event.

"Bhuvneshwar will now return to India and commence his rehabilitation at the National Cricket Academy (NCA) in Bengaluru," it added.

He was not named in the T20 squad for the upcoming tour of New Zealand due to the injury.

The 29-year-old, who has played 21 Tests, 114 ODIs and 43 T20Is for India, missed the home ODI series against the West Indies days after returning to action against the same opposition in the T20 format.

Also, as reported on Wednesday, the BCCI said young batsman Prithvi Shaw has left for New Zealand to join the India 'A' team after completing his rehabilitation for a shoulder injury.

"Opening batsman Prithvi Shaw has completed his rehab at the NCA and has recovered from his left shoulder injury. He has been made available for selection for all formats of the game. Prithvi has left for New Zealand and will soon join India A," the Board statement added.

The India A team is scheduled to play three One-dayers and two unofficial Tests during the tour, starting January 22.