The BCCI on Saturday authorised its president Shashank Manohar to take a decision on whether to challenge the Bombay High Court's decision to uphold the stay on the termination of contracts of IPL franchisees Rajasthan Royals and Kings XI Punjab in the Apex Court.

The decision was taken at the BCCI's Working Committee meeting in Mumbai.

"The Working Committee has authorised the President to take a decision on filing an appeal in the Supreme Court," BCCI sources said.

On December 14, Justice S J Vazifdar dismissed an appeal filed by BCCI challenging the stay granted to Royals by the arbitrator, appointed by both the parties to resolve their dispute, and permitted the IPL franchisee to participate in the IPL4 auction.

A day later, the two-member Division Bench of Justice D Y Chandrachud and Justice Anoop Mohata upheld the order of its single bench, Justice Vazifdar, to stay the termination of Kings XI Punjab saying that the entire basis of the letter of termination issued by the BCCI to the Mohali franchise was "erroneous and flawed".

BCCI had on October 10 terminated the franchisee agreement of Royals -- winners of IPL in 2008 -- and Kings XI Punjab alleging that the teams had committed breach of the contract by having changes in its corporate structure without consent.

Meanwhile, in another development, the sources said that the Players' Auction for IPL4 would be held as scheduled on January 8-9. 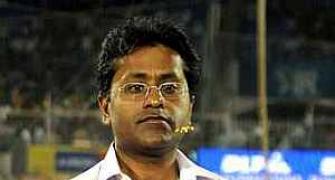 IPL players' auction may be put off