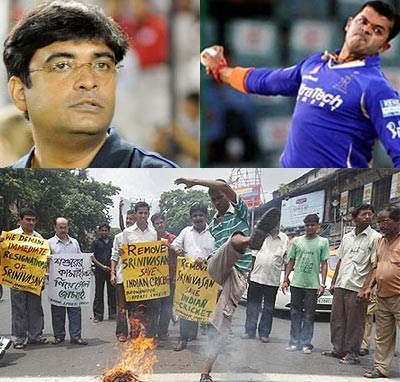 Three BCCI officials were among four persons who deposed before the Supreme Court-appointed Justice Lodha Committee on Thursday in relation to the IPL spot-fixing scandal.

Former Board of Control for Cricket in India secretary Sanjay Jagdale, current IPL Governing Council member Ajay Shirke and Prof R S Shetty, the Board's General Manager (Game Development), deposed before the committee, at a five-star hotel in south Mumbai, it is learnt.

Shirke, a former BCCI treasurer, had resigned along with Jagdale in May 2013 in the wake of the IPL spot-fixing scandal.

The committee, set up on January 22, was given the mandate of deciding on the quantum of punishment to be imposed on former team principal of Chennai Super Kings Gurunath Meiyappan and co-owner of Rajasthan Royals Raj Kundra, who were both found guilty of betting in the IPL, and deciding on the fate of their respective teams.

Setting up the committee of judges, headed by former CJI Lodha, the two-member Supreme Court bench of Justices T S Thakur and F M I Khalifulla had said "to remove bias" and have a process which will be "objective and transparent" there was a need for an independent committee to decide on the issues.

The committee will further probe the allegation of betting against the BCCI's chief operating officer, Sunder Raman, and, if found guilty, award punishment.

The Supreme Court bench had asked the committee to issue notices to Meiyappan, Kundra and others, complete its work in six months and place its report before it.

Further, the panel will make recommendations for reforms in the BCCI.

Source: PTI© Copyright 2021 PTI. All rights reserved. Republication or redistribution of PTI content, including by framing or similar means, is expressly prohibited without the prior written consent.
Related News: IPL Governing Council, BCCI, Former Board of Control for Cricket in India, Ajay Shirke, Prof R S Shetty
SHARE THIS STORYCOMMENT
Print this article