BCCI has not ruled out Chennai as World T20 venue: Thakur 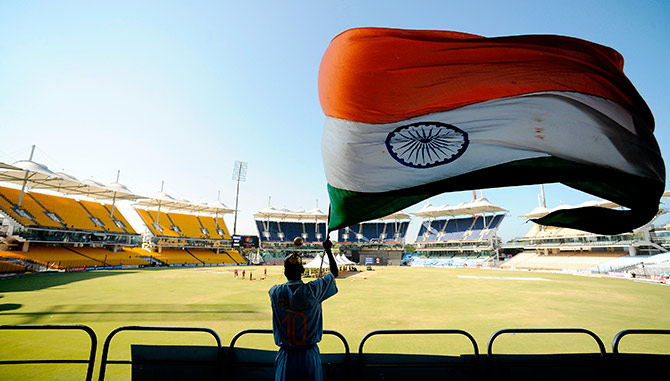 IMAGE: A fan waves a flag during an Indian team training session at the MA Chidambaram stadium in Chennai. Photograph: Philip Brown/Reuters

The MA Chidambaram Stadium in Chennai faces certain problems ahead of the ICC World Twenty20 next year, but the BCCI has not yet ruled out the ground as one of the venues for the biennial event.

"We held a detailed discussion today. There were certain centres which were given deadlines of August 25 to submit completion reports and we are still waiting for their certificates. Yes, in Chennai there was some problem. We had been keeping it pending," said BCCI secretary Anurag Thakur.

He talked to reporters after a BCCI meeting to take stock of the preparations for the mega event commencing on March 11, 2016.

"We have not ruled out Chennai. The only issue is which matches can be played in Chennai. There are certain limitations - can't play Sri Lanka there, three stands are not complete and you can't keep Indian fans away from those stands," said the BCCI secretary.

"I think that situation won't arise," he said when asked whether the BCCI had any standby venue in consideration.

Kolkata is set to host the final on April 3.