BCCI has not officially sought any change in schedule: ECB 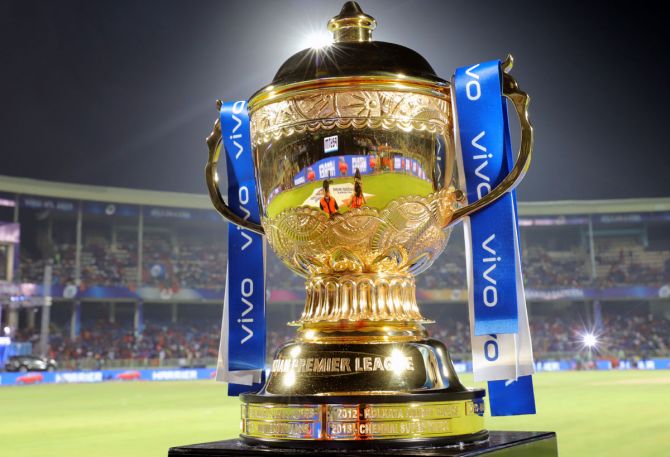 IMAGE: The BCCI stands to lose revenues to the tune of Rs 2500 crore if IPL 2021 is not completed. Photograph: BCCI/IPL

The BCCI has not made any official request to alter the schedule for India's five-Test series against England for completing the postponed IPL, the England and Wales Cricket Board (ECB) said on Friday.

British media had reported about a possible approach from the BCCI to advance the first Test, starting August 4, by a week so that the remaining 31 matches of the League could be held.

However, the England and Wales Cricket Board (ECB) said they plan to follow the original schedule since their Indian counterparts have not yet made any official request for a change.

"We talk to the BCCI on a regular basis about a wide range of issues especially as we address the challenges of COVID-19 but have had no official request to change dates and are continuing to plan for the five Test series as scheduled," an ECB spokesperson told PTI when asked about the possible change in the schedule.

The BCCI stands to lose revenues to the tune of Rs 2500 crore if the 2021 edition of Indian Premier League (IPL) is not completed.

This year's edition was postponed recently when COVID-19 cases were reported inside the bio-bubble for the League.

Former England captain and renowned cricket writer Michael Atherton wrote in his column for 'The Times' that the BCCI has enquired about the possibility of moving the final Test of the English summer to make room to complete the postponed IPL.

When approached, a BCCI source said the Board is certainly exploring options but the ECB has not been approached officially.

"The situation is pretty fluid now. There are options that are being explored but no official request has yet been sent. Obviously as Atherton wrote in his column, there are some specific enquiries being made. Who said that enquiries mean official communications," a BCCI source said.

The Test series as of now is scheduled to conclude at the Old Trafford. The fifth Test will begin on September 10. The game match is expected to attract big crowd and the Lancashire county has already started selling the tickets.

If India make a formal request, the ECB will have to tweak the window for their ambitious project 'The Hundred' along with limited overs series against Pakistan.

Pakistan will play three ODIs and as many Twenty20 Internationals between July 8 and 20. The Hundred will be played between July 23 and August 22.

However if BCCI manages to convince the ECB for advancing the dates, it will be interesting to find what kind if quid pro quo is sought -- asking participation of Indian cricketers in the 'Hundred' or hosting the remainder of the IPL in England?