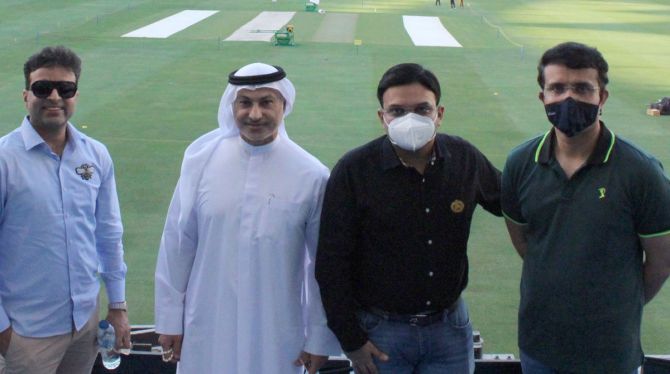 The BCCI and Emirates Cricket Board (ECB) on Saturday signed a Memorandum of Understanding (MoU) and hosting agreement to boost cricketing ties between the two countries.

"I along with Vice Chairman of Emirates Cricket Board, Khalid Al Zarooni signed an MoU & Hosting agreement between @BCCI and @EmiratesCricket to boost the cricketing ties between our countries," BCCI secretary Jay Shah tweeted on Saturday.

Shah was joined by BCCI president Sourav Ganguly and treasurer Arun Dhumal during the meeting.

Moved out of India due to a surge in COVID-19 cases, the 13th edition of the IPL will be held in the three venues of Dubai, Abu Dhabi and Sharjah in the UAE.

The 13th edition of the T20 tournament kicks off with a clash between defending champions Mumbai Indians and runners-up Chennai Super Kings.

Dubai will play host to 24 games, 20 matches will be hosted by Abu Dhabi while Sharjah will hold 12 games.

The dates and venues for the play-off stages will be released later.