What happened after final was unfortunate: Bangladesh skipper on rival teams coming to blows 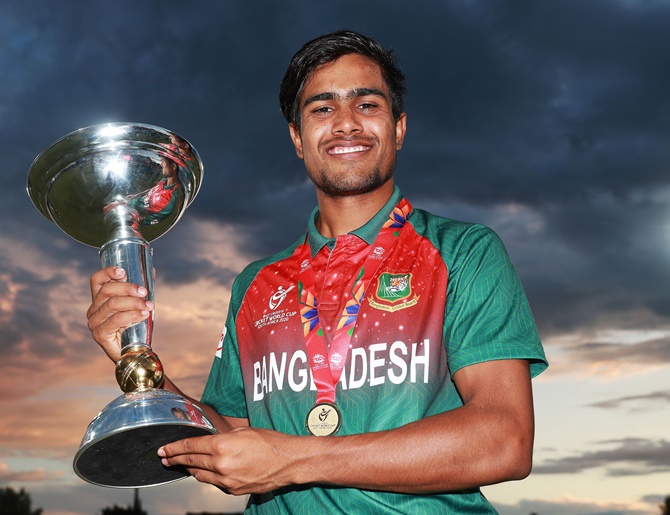 "It's a dream come true" said Bangladesh captain Akbar Ali, who regretted the unwanted aggression from his players which nearly resulted into a free for all after his team won the U-19 ICC World Cup.

The Bangladesh players were overtly aggressive while fielding with their lead pacer Shoriful Islam sledging the Indian batsmen after every delivery.

"Some of our bowlers were emotional and were pumped up. What happened after the game was unfortunate. I would like to congratulate India," skipper Akbar showed maturity beyond years at the post-match conference.

As soon as the match ended, it became tense with Bangladeshi players rushing to the ground and most of them still displaying aggressive body language.

In fact, one India player rushed to confront and pushed a Bangladeshi player who had allegedly said uncharitable things and it was coach Paras Mhambrey seen calming his boys.

"It's a dream come true. It's all about the hard work we have done over the last two years. The coaching staff...I just cannot thank them enough for how much support they have given us on and off the field. We've had a very good experience, and this is just the beginning for us. Hopefully, this will be the stepping stone for us," said the skipper, who was also adjudged Player of the Final for his composed unbeaten 43.

He then thanked the Bangladeshi supporters in his mother tongue.

"Those who have supported us here have been our 12th man here. We really appreciate it."

India skipper Priyam Garg acknowledged it was a poor day with the bat and they would have needed a total of 210-220 to make a match of it.

"It's a bad day, but our boys fought really well. Even with such a low total, we made it difficult for them, and I would like to thank my team for that."

"The biggest factor was the toss, because the wicket was a bit damp. We had a good start, and we should have got to at least 210-220. That would have been a much better score."

While the bowlers bowled more than 20 plus wides and no-balls, Priyam doesn't think it could have been much different.

"I don't think we could have done much different. For 178, we responded really well, and we lost this because we didn't bat well enough. That's about it. We enjoyed the World Cup. We played a series here too, and this was enjoyable too."