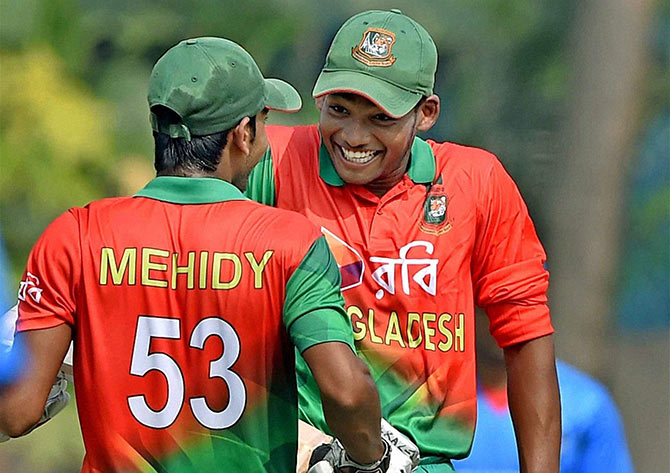 Bangladesh's spinners claimed seven wickets in an eight-wicket victory over Afghanistan and set up a final against India in the Under-19 Tri-series One-day cricket tournament in Kolkata on Wednesday.

Off-spinner Saeed Sarkar (3-6) and left-arm spinner Saleh Ahmed Shawon Gazi (3-32) claimed three wickets each as the Afghans were dismissed for 99 in 26.2 overs after they opted to bat in a must-win match.

Bangladesh then chased down the target in less than 25 overs, losing two wickets.

Both teams will lock horns in the Sunday final.

Earlier, Afghanistan were given a steady start by openers Hazratullah (16) and skipper Ihsanullah (12), who put on 34 in 5.4 overs, but Bangladesh skipper Mehedi Hasan Miraz (1-19) triggered the collapse with his gentle off-spin.

Left-arm pacer Mehedi Hasan Rana (2-33) joined in the act to reduce them to 34 for 3 in 6.3 overs by taking two wickets in three deliveries.

The left-arm spin and off-spin duo of Saleh Ahmed Shawon Gazi and Saeed Sarkar continued the free flow of wickets with the Afghan batsmen in no mood to build a platform.