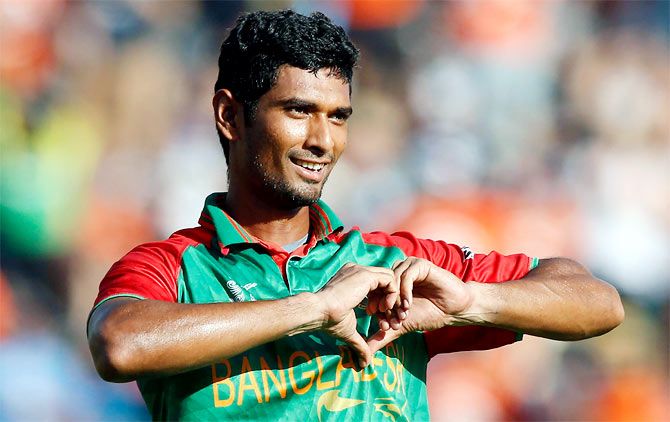 Mahmudullah Riyadh produced an all-round effort to guide Bangladesh to a comprehensive 51-run victory over the United Arab Emirates, as the host opened their account in the Asia Cup T20 tournament, in Mirpur, on Friday.

Batting first, Bangladesh managed only 133 for eight, largely due to rearguard action from Man-of-the-Match Mahmudullah, who scored a quickfire 36 off 27 balls, inclusive of a boundary and two sixes.

However, the UAE's batting faltered once again in a below-par effort and they were bowled out for 82 in only 17.4 overs.

Mahmudullah took 2 for 5 along with a brilliant catch to make it a memorable outing for him.

It was a day where Mahmudullah showed his all-round skills, taking a smart diving catch at gully to dismiss Shaiman Anwar off Mortaza's bowling.

The UAE's chase again started on a disastrous note as Muhammaed Kaleem (0) provided an easy catch to Mortaza, standing at mid-on.

Rohan Mustafa (18) hit a six behind square off Taskin Ahmed but his lack of footwork was exposed by Mortaza as his attempted slash over point only ballooned up to Mustafizur at short third-man.

Mustafizur himself could have claimed a hat-trick after taking wickets with well-disguised slower ones in the first and second deliveries of the eighth over.

The match was over in the eighth over when the dismissal of Mohammed Shahzad (12) and Swapnil Patil (0) made it 34 for five and there was no looking back after that.

Mahmudullah and Shakib then polished the lower order to give Bangladesh their first victory in the tournament.

However, there is room for improvement as far as their batting is concerned.

Save Mohammed Mithun's 41-ball-47 and Mahmudullah's cameo, there was not much to write home about home team's batting which will be tested further against better bowling attacks.

Bangladesh had lost their opening encounter to India, while the UAE lost their first two matches.