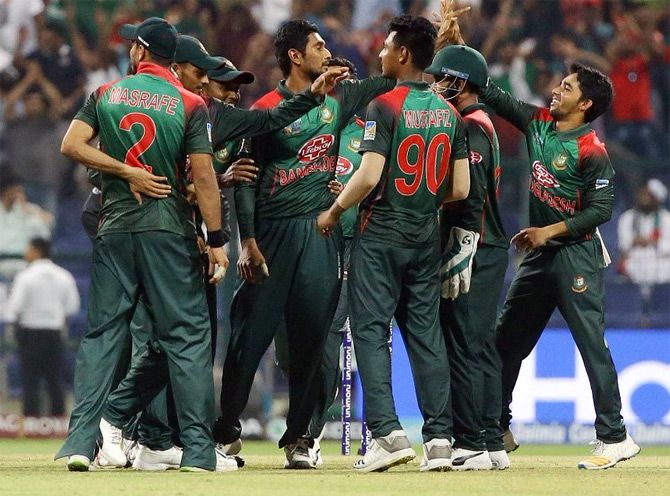 IMAGE: The Bangladesh cricket board tweeted that all their players are safe (Image used for representational purposes). Photograph: Asian Cricket Council/Twitter

There were reports of armed police at a second mosque in the suburb of Linwood.

Witnesses told media that a man dressed in a military-style, camouflage outfit, and carrying an automatic rifle had started randomly shooting people in the Al Noor mosque.

The Bangladesh cricket team was arriving for prayers at the mosque when the shooting occurred but all members were safe, a team coach told Reuters.

Bangladesh Cricket Board spokesman Jalal Yunus said most of the team were bussed to the mosque in Christchurch and were about to go inside when the incident happened.

"They are safe. But they are mentally shocked. We have asked the team to stay confined in the hotel," he told AFP.

Opening batsman Tamim Iqbal wrote on Twitter: "Entire team got saved from active shooters!!! Frightening experience and please keep us in your prayers."

"Alhamdulillah Allah save us today while shooting in Christchurch in the mosque," tweeted another player, Mushfiqur Rahim.

"We r extremely lucky...never want to see this things happen again....pray for us." 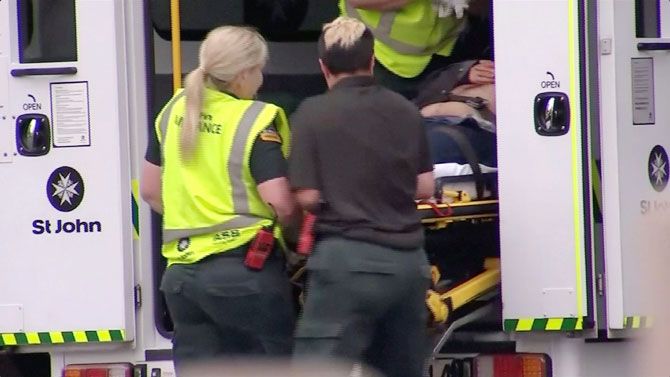 "Our thoughts are with everyone in Christchurch. We can confirm that both teams and support staff groups are safe and accounted for. We will be working with authorities on the next steps regarding tomorrow’s scheduled Test. @BCBtigers," the New Zealand cricket board wrote on their Twitter handle.

Police said they had one person in custody but they were not sure if others were involved.

Police advised people to stay away from mosques.

Prime Minister Jacinda Ardern said there was no place in New Zealand for such acts of extreme violence.

Police said earlier they were hunting "an active shooter" in the centre of Christchurch city.

"A serious and evolving situation is occurring in Christchurch with an active shooter," New Zealand Police Commissioner Mike Bush said.

"Police are responding with its full capability to manage the situation, but the risk environment remains extremely high." 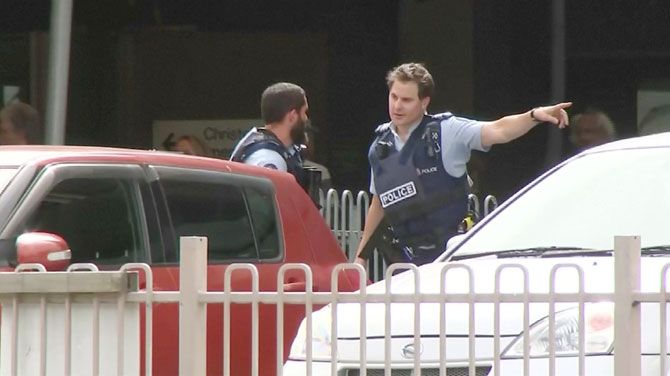 IMAGE: In this video grab police officers are seen after reports that several shots had been fired at a mosque, in central Christchurch on Friday. Photograph: TVNZ/via REUTERS TV

Media said shots had been fired near a mosque and a witness told broadcaster One News that he had seen three people lying on the ground, bleeding outside the building.

Radio New Zealand quoted a witness inside the mosque saying he heard shots fired and at least four people were lying on the ground and "there was blood everywhere".

"Horrified to hear of Christchurch mosque shootings. There is never a justification for that sort of hatred," said Amy Adams, a member of parliament from Christchurch.

The Bangladesh cricket team is in Christchurch to play New Zealand in a third cricket Test, which has now been cancelled following the shootout.

"They were on the bus, which was just pulling up to the mosque when the shooting begun,” Mario Villavarayen, strength and conditioning coach of the Bangladesh cricket team, told Reuters in a message.

"They are shaken but good.”

Muslims account for just over 1 percent of New Zealand's population, a 2013 census showed.