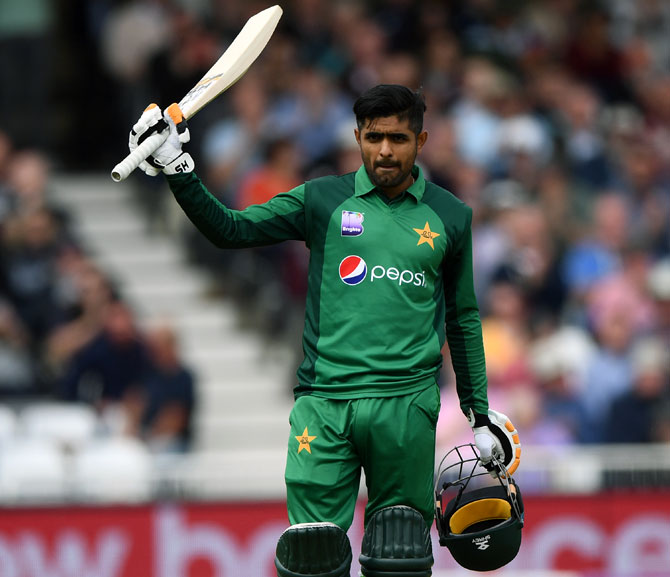 IMAGE: Babar Azam has been a prolific scorer and currently ranks among the top five batsmen in all three formats.. Photograph: Stu Forster/Getty Images

Pakistan named Babar Azam as their new captain in one-day internationals, putting the elegant batsman in charge of both their limited-overs teams after a stellar year with the bat.

The top order batsman, who took over Twenty20 captaincy earlier this year, succeeds Sarfaraz Ahmed as Pakistan's white-ball leader while Azhar Ali also got an extension as skipper of the Test side for the 2020-21 season.

"I want to congratulate Azhar Ali and Babar Azam for getting captaincy extensions," chief selector and head coach Misbah-ul-Haq said in a statement issued by the Pakistan Cricket Board (PCB) on Wednesday.

"This is absolutely the right decision as they also require certainty and clarity on their future roles.

"I am sure they will now start looking to the future and start planning so that they can build sides that can perform at the expected levels."

Babar has been a prolific scorer and currently ranks among the top five batsmen in all three formats.

Professional cricket remains suspended because of the coronavirus pandemic but Pakistan are preparing for their tours of Ireland, England and South Africa as well as the Twenty20 World Cup in Australia in October-November.

Keeping the schedule in mind, PCB also handed out central contracts for the 2020-21 season, omitting the pace trio of Mohammad Amir, Wahab Riaz and Hasan Ali.

"...considering Hasan missed most of the season due to an injury and Amir and Wahab decided to focus on white-ball cricket, this was the right move," Misbah said of the "tough" decision.

"However, Amir and Wahab are senior and experienced bowlers and they remain in contention as we believe they can still contribute to the Pakistan men’s cricket team and also mentor our young battery of fast bowlers."

Left-arm quick Shaheen Afridi and Azhar were promoted to Category A where they join Babar, while Sarfaraz and veteran spinner Yasir Shah drop to Category B in the new 18-member list.

© Copyright 2020 Reuters Limited. All rights reserved. Republication or redistribution of Reuters content, including by framing or similar means, is expressly prohibited without the prior written consent of Reuters. Reuters shall not be liable for any errors or delays in the content, or for any actions taken in reliance thereon.
Related News: Babar Azam, Pakistan Cricket Board, Mohammad Amir, Wahab Riaz, Azhar Ali
SHARE THIS STORYCOMMENT
Print this article