India's batting floundered miserably again to give Australia a massive 87-run victory in the tri-series ODI match in Sydney on Sunday and only a miracle can now help the beleaguered team to qualify for the finals.

The Indians did reasonably well in the death overs to restrict the hosts to 252 for nine but could never really recover from the early jolts to fold up for a paltry 165 in 39.3 overs to suffer their third defeat on the trot in what turned out to be a lop-sided contest marked by controversial 'obstruction' incidents.

The resounding victory has given Australia a berth in the finals as they rode on useful batting contributions from David Warner (68), Matthew Wade (56) and David Hussey (54) and some disciplined bowling on a sporting SCG track.

It was again the spineless batting display that cost India dearly in a match which they desperately needed to win to keep their hopes alive for a berth in the finals which looks out of their reach now. 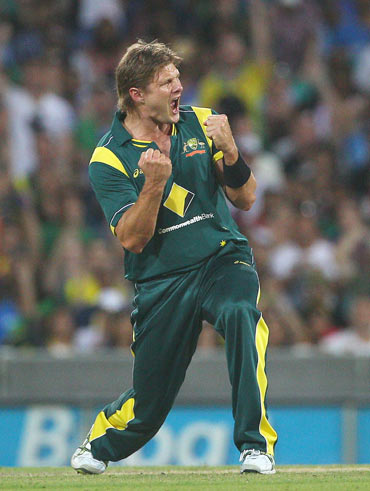 The lacklustre show by the Indians gave the Australians a bonus point which has now put them on top of the points table with 19 points followed by Sri Lanka who have 15 points. India remained static on 10 points.

Although the Indians seem down and out, they still have a slender chance of sneaking into the finals if they can manage to beat Sri Lanka with a bonus point in their last league match and hope that the islanders lose to Australia in their last match with a big margin.

In such a scenario, both India and Sri Lanka will be tied with 15 points and the net run rate will come into play. As many as six Australian bowlers grabbed wickets with Shane Watson marking his return to international cricket with 2 for 9 from five overs.

The by now-familiar inability of the top order to strike was in evidence as was the fact that middle-order has now become adept at wasting good starts.

Virender Sehwag (5), utterly miserable on this tour, was again a Blink-And-You-Miss Kind of case, lasting 11 balls and driving a return catch to Ben Hilfenhaus who took a stunning catch off his bootlaces in his follow through.

Gautam Gambhir had dabbed a ball on the off-side and Lee crossed the pitch in a bid to prevent a single. But even as fielder David Warner picked up the ball and took a shy at the stumps, Lee stood in a manner, hands on his knees with his back to the non-striker, that Tendulkar had to go round him and thus lost the crucial second of making his ground.

It was the second controversial moment of the day, the first being the 'obstructing the field' appeal against David Hussey which wasn't upheld by the umpires.

Hussey had thrust out his hands and prevented Suresh Raina's throw from reaching the stumps but umpires reckoned the batsmen had done so to prevent a physical injury and he didn't intend to prevent a run-out.

But to return to the Indian innings, Gambhir (23) and Virat Kohli (21) briefly promised a revival, putting on 44 runs for the third wicket before both fell close to each other.

Kohli flicked Shane Watson to midwicket and Gambhir dragged a square drive off Clint McKay on to his stumps. For the umpteenth time this summer, the batsmen had failed to capitalize on good foundations.

Suresh Raina (8) was the next one to go, edging Watson for a catch behind the stumps and India were 89 for 5 in the 21st over. Ravinder Jadeja (8) too left after India had just reached the 100-mark in the 25th over.

Mahendra Singh Dhoni found the run-making a stifling experience and had made only 14 from 49 balls when a Hilfenhaus delivery found him plumb in front of his stumps. Ravi Ashwin and Irfan Pathan, coming at number nine, stayed for a while but the end was near. Ashwin mistimed a flick and was caught at midwicket while Pathan, after slamming Lee for a stunning straight six, lofted one for fielder at deep square leg to complete the catch.

The rest lost little time in gifting away their wicket to complete the shambolic batting display.

Earlier, Praveen Kumar provided India two early wickets, Umesh Yadav chipped in with a couple of scalps in the final two overs but Virender Sehwag was the surprise package with 3 for 43 from his nine overs.

In the final 10 overs, India conceded only 47 runs. India had begun well through Praveen, who immediately made his presence felt after being given a game on account of Vinay Kumar's hamstring injury.

Praveen began with a maiden and then took the wickets of stand-in captain Shane Watson (1) and Peter Forrest (7) in  is first spell of 7-1-22-2.

Watson pulled a short-delivery from Praveen into the hands of the mid-on fielder while Forrest tried to cut a rising delivery too close to him and dragged it down on to his stumps. 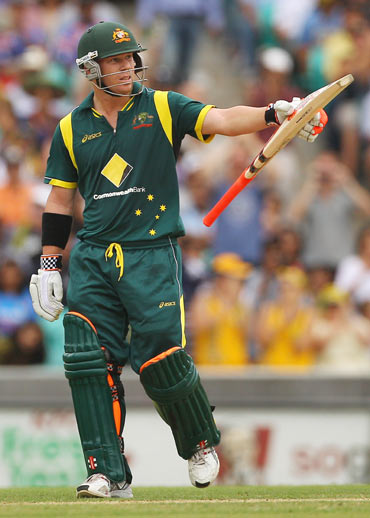 Warner and Mike Hussey (10) then tried to stem the rot before the latter fell by way of run-out. Hussey drove Ashwin past covers to long-off and sensing a second run went for it as his partner Warner had initially responded.

Warner then changed his mind and Hussey was too way down the track to turn and regain the non-striker's crease. Fielder Irfan Pathan was good with his throw and Ashwin did the rest. Australia were 57 for 3 in the 14th over.

India's stranglehold was loosened when Umesh Yadav was introduced in the 15th over. The medium-pacer conceded 20 runs in his two overs, much to Warner's benefit who completed his half century by thrashing him through the covers, needing 48 balls with five fours.

Warner left as soon as the 100 of the innings was posted. He tried to sweep a fullish delivery from Ravindra Jadeja in the 21st over. As the ball looped up in the air, both Suresh Raina, from inside the circle, and Irfan Pathan at fine leg, dashed for it.

Raina, running with the ball, took a splendid catch but couldn't avoid the on-rushing Pathan and both collided in a terrible manner. However, both escaped without any serious injury.

Warner made 68 off 66 balls and hit seven fours during his knock. Australia were 107 for 4 in the 21st over and in trouble.

Then the "obstruction of field" appeal went Australia's way and Wade and Hussey didn't need any other invitation to turn the situation around for their team. The two batsmen matched each other stroke for stroke and briskness between the wickets. Wade completed his half century with a massive six over midwicket off Ashwin.

However, the left-hander departed in the 40th over while trying to steer a delivery from Umesh Yadav, caught comfortably by Dhoni.

Wade made 56 off 66 balls with two fours and a six and shared a 94-run fifth wicket stand with Hussey off 110 balls. The latter completed his half century in the same over, facing 58 balls and striking two fours. Australia were 205 for 5 after 40 overs.

Yadav made it a twin strike when he made one rise on Hussey and the batsman, trying to slash it, edged the chance behind the stumps. The junior Hussey made 54 off 64 balls with two fours. Australia were 212 for 6 in the 43nd over.

India built on these two successes when Sehwag claimed a wicket in the 44th over, drawing Clint Mckay forward and Dhoni effecting a stumping. Australia were 217 for 7 in the 44th over with last three wickets being claimed in the space of 23 balls for 16 runs.

Sehwag too built on his success when he lured Brett Lee (4) into hitting a catch in the deep where Virat Kohli held an easy catch. 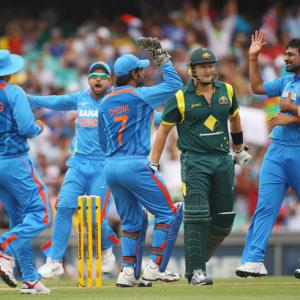 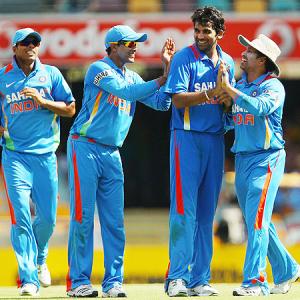