A lacklustre India opened their tri-series campaign on a disappointing note as they slumped to a 65-run defeat against  Australia, who yet again exposed the batting chinks of the visitors in a rain-truncated encounter in Melbourne on Sunday.

Australia recovered from a few early jolts to score 216 for five in their 32 overs and then bundled out the visitors for 151 in 29.4 overs at the flood-lit MCG.

The Indians dropped out of form Virender Sehwag from the team but the batting woes, that has plagued the side right through the Test series, continued to haunt them in the first match of the tr-series.

Some of the batsmen got good start but could not translate them into big scores. 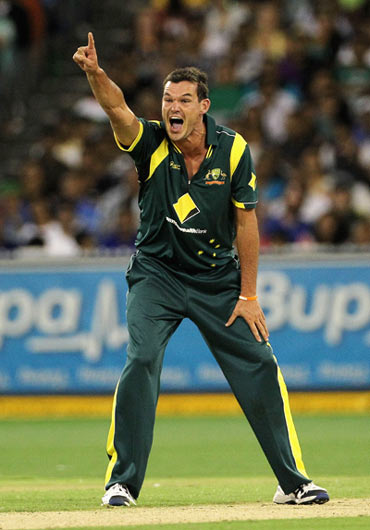 It was left-arm paceman Starc who struck early with the scalps of openers Sachin Tendulkar (2) and Gautam Gambhir (5) in his first spell. Bowling full and with the same venom as in Tests, Starc and his new ball partner Ryan Harris came hard at the Indians first up.

Tendulkar was the first one to leave, driving away from his body and being caught brilliantly by a diving Ricky Ponting at point region. Gambhir departed in his now customary fashion, edging a catch behind the stumps to Matthew Wade.

Kohli and Sharma were undeterred and gave glimpses of their promise against a hostile opponent. Both flashed their bats hard and were not afraid to come out of their crease.

They had raised 51 runs off 47 balls when Clint McKay, on his first four balls in the match, sent them packing.

Kohli cut McKay's second ball most fiercely but Ponting, coming in forward at point, held an amazing catch in front of his face.

Two balls later, Sharma held his bat out limply and offered a catch to Wade.

The dye was now cast and it only worsened when Suresh Raina (4) hit one up in the air off debutant Daniel Christian. India were now reeling at 77 for 5 in the 12th over.

They rode on a fourth-wicket stand of 73 off 50 balls between new opener Matthew Wade (67) and Mike Hussey (45), climaxed superbly by David Hussey's 61 off 30 balls and his sixth-wicket stand of 62 off 32 balls with Daniel Christian (17).

India, so spectacular the other night, were sloppy in the field and only doughty Vinay Kumar stood out with 3 for 21 from his seven overs.

Australia were 35 for 2 when rain stopped play and India gained an immediate success on resumption when skipper  Michael Clarke (10) holed out to deep midwicket off the part-time spin of Rohit Sharma.

But then Australia stabilised on the shoulders of Wade and Hussey as both forced fumbles on the field from the Indians and regularly hit fours off Indian spinners.

Debutant wicketkeeper-batsman Wade made an immediate impression with 67 off 69 balls with four fours and two sixes.

Australians broke loose in the 20th over when R Ashwin went for 14 runs with a four each to the two batsmen. Unbeaten on 21 at the rain break, Wade attacked Rohit Sharma's second over by lifting him to widish long on. He then ran and dived for every opportunity before reaching his maiden half century with a tap on the onside, consuming 55 balls with four fours and a six.

Million-dollar man Ravindra Jadeja got a rude shock when Wade came down the track to lift him into the stands for a massive six. Introduction of leg-spinner Rahul Sharma brought the much-needed edge in the visitors' bowling and the  youngster broke the stand when he had Wade playing him on to his stumps. 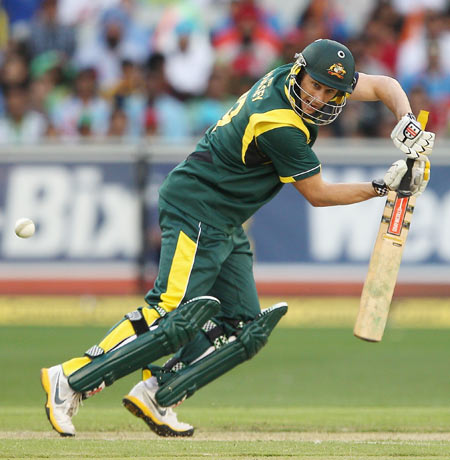 Mike Hussey, meanwhile, kept his busy self at the other end, sweeping Indian spinner magnificently and sharing a little cameo of a 32 off 19 balls with his younger brother David for the sixth wicket.

Rahul Sharma came on to bowl and had sent down two deliveries, conceding two runs before the umpires realised the leg-spinner had already bowled six overs.

According to rules, only two bowlers could have bowled seven overs and this was already done by Praveen and Vinay  Kumar.

Australians, in all, collected 181 runs from the final 22 overs. Before the rain, Vinay Kumar was at the centre of India's charge with the wickets of David Warner (6) and Ricky Ponting (2).

Australia were tottering at 35 for 2 when it began to rain at the MCG and in between stops and starts, the game was still held up at 5.00 pm local time, almost two hours since it first started to rain.

Australian openers were tentative from the start after Indian skipper Mahendra Singh Dhoni won the toss and opted to field in overcast conditions.