Peter Siddle took five wickets as Australia bowled India out for 272 before extending their lead to 382 runs by the close of play on third day of the fourth Test on Thursday.

Virat Kohli upstaged his more esteemed team mates with his team's first century of the series but was dismissed for 116 to bring an end to the Indian first innings an hour before close with the tourists well behind Australia's 604 for seven declared.

Australia, already 3-0 up in the series, decided to embark on their second innings despite having the option of forcing the Indians to bat again but quickly lost their top order to stand at 50 for three at stumps.

Michael Clarke (nine not out) and Ricky Ponting (one not out) both made double centuries in the first innings and will be looking to build another big total when they resume on Friday.

Siddle took 5-49, including two wickets in successive balls, and Ben Hilfenhaus chipped in with 3-62 as Australia's pacemen once again dominated the Indian batsmen. 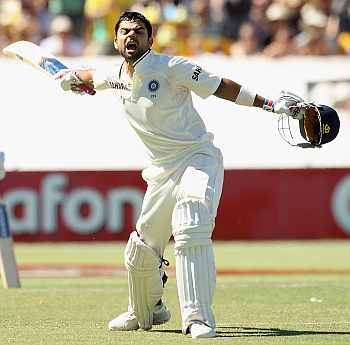 Spinner Ravi Ashwin later proved that India could also get wickets on the track when he dismissed David Warner (28) and Ed Cowan (10) while paceman Zaheer Khan trapped Shaun Marsh lbw for a duck to continue the number three batsmen's miserable series.

Destined to lose the series after humbling defeats in the first three Tests, India also lost three early wickets to start the day with Sachin Tendulkar, Gautam Gambhir and VVS Laxman all departing before lunch on another sweltering morning.

Kohli put on 114 for the sixth wicket with Wriddhiman Saha and the pair almost made it unscathed through the second session before the stand-in wicketkeeper was bowled by Ryan Harris for 35 to bring up the tea break.

The 23-year-old Kohli, under pressure for his place in the side until he hit 129 runs over two innings in Perth, flirted with calamity on 99 before claiming his first century in his eighth Test with two runs through the covers.

By then, however, Siddle had removed Ashwin (5) lbw and Zaheer, caught behind for a golden duck, to set up hat-trick delivery which Ishant Sharma defended well.

Sharma lasted 22 balls and had made 16 runs when Hilfenhaus hit his off stump with a fine delivery and the dependable quick returned with a full toss that trapped Kohli leg before.

Tendulkar's 24th attempt to secure his 100th international century attracted a bumper crowd to one of cricket's most picturesque venues on the Australia Day holiday but he had made just 25 runs when Siddle struck for the first time.

The ever-willing Australian quick's full delivery drew Tendulkar forward and the ball flashed off the bat to allow Ponting to take a low catch at second slip.

Siddle struck again in his next over to remove Gambhir for 34 with a brutish bouncer that came off the batsman's bat and shoulder before looping into the air for a diving Mike Hussey to catch.

Laxman, once the nemesis of Australian bowling, lasted until just before lunch before he suffered yet another failure on the tour when Nathan Lyon induced him into edging the ball through to wicketkeeper Brad Haddin for 18.