Mahendra Singh Dhoni, who received brickbats just a few months ago after the England series disaster, was showered with accolades from former players after his career-best knock of unbeaten 206 in the first Test against Australia in Chennai.

"The coolest man in world cricket, MS Dhoni delivers when it most matters... Incredible innings against the Aussies...," Vaughan wrote on his twitter account. 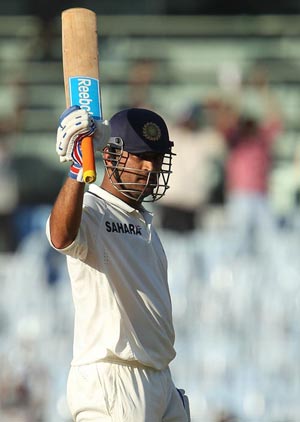 Another Australian legend Glenn McGrath, who is heading the MRF Pace Foundation here, wrote on his Twitter page, "Great innings by MS Dhoni 206*. India in a strong position against the Aussies."

India's World Cup Yuvraj Singh tweeted, "Congratulations ! To @imVkohli and @msdhoni on there spectacular knocks specially ms a double ton in test cricket is a memory."

"What an innings @msdhoni truly inspirational stuff. One of the best innings i have seen," Dhoni's Indian team-mate Ajinkya Rahane said.

Another Indian batsman Suresh Raina tweeted, "That was a dominating double! Congratulations @msdhoni Take it to a triple ton mate."

Bollywood superstar Amitabh Bachchan also joined in lauding Dhoni and wondered how the critics of the Indian captain would react now.

"Dhoni 206* ..!! Incredible feat ! Where are all those 'prophets of doom' that were writing him off , just ! 'Prophets of Doom' : 'bhaisaheb yahan chullu bhar pani kahin milega ?'," wrote Bachchan. 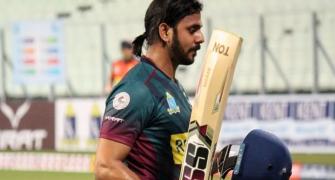 India to host England for full tour next year: Ganguly