Warner likely to be appointed T20 skipper against India

Australia's latest batting sensation David Warner might lead the team against India in the Two Twenty20 International which are scheduled once the Test series gets over.

According to a report published in The Telegraph, the Australian selectors are mulling the idea of making Warner the leader in the shortest version.

"While it will not happen any time soon in Test cricket, David Warner could be leading his country within a fortnight, when Australia takes on India in the first Twenty20 international to be played at Sydney's ANZ Stadium," the newspaper was quoted as saying. 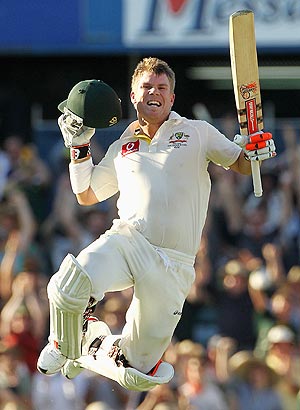 "The new five-man panel made Warner vice-captain of the Australia A team that played New Zealand in Brisbane during November and captain of the Cricket Australia Chairman's XI, which played a three-day match against India in Canberra last month."

"It's not just Warners batting ability that makes him an attractive leadership prospect, it's his feisty nature.

"The explosive left-hander may be new to Test cricket, but he is right at home with the big boys," it wrote.

The logic behind making Warner the skipper in T20 is that in another five years Warner may be ready to lead the Test side just like Clarke took over from Ponting.