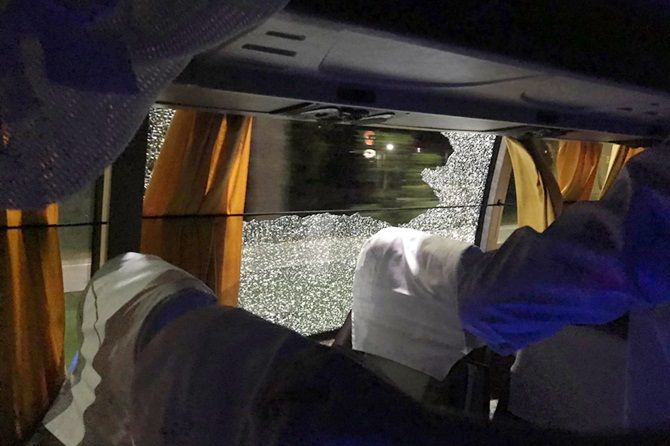 Australia's cricket team suffered a scare following their Twenty20 International victory over India in Guwahati on Tuesday after a rock was thrown at their team bus, shattering one of the windows, its governing body Cricket Australia (CA) said.

Players and staff were travelling from Busapara Stadium back to their team hotel in the eastern city when the rock pierced the window on the right-hand side of the bus, CA said on its website (cricket.com.au).

The board said the rock was "believed to be roughly the size of a cricket ball" and had ended up inside the bus.

"In a remarkable piece of good fortune, no one was sitting on the seat next to the window when it was broken," CA's report said.

"While no one was injured, the Australian players were understandably shaken up by the incident."

He said he has already spoken to Assam Chief Minister Sarbananda Sonowal about the incident.

"Have spoken to @sarbanandsonwal ji about the Guwahati incident. Personal security of visiting athletes & teams is extremely important for us," he tweeted.

Australia's team bus was also struck by a rock in Bangladesh five weeks ago as it travelled back to a hotel following the first day's play of the second and final Test against the home side in Chittagong.

That prompted authorities to tighten security around the Australia team.

Australia opening batsman Aaron Finch posted a photo of a shattered window on a bus on Twitter.

"Pretty scary having a rock thrown through the team bus window on the way back to the hotel!!" he tweeted.

Jason Behrendorff took four wickets for 21 in an inspired spell of fast bowling to set up an eight-wicket win and level the three-match series at 1-1.

The touring side, who lost the one-day series 4-1 and the first T20 by nine wickets, reached their target of 119 with 27 balls to spare.

Australia are scheduled to play India in the third and final Twenty20 of the series in Hyderabad on Friday.

'Such incidents won't occur in again"

Meanwhile, Cricket Association secretary Pradip Buragohain informed that the incident took place when the team was heading back to the hotel.

"We made every attempt to ensure foolproof security but don't know how this happened. It was near the team hotel and not at the crowded street near the stadium," Buragohain told PTI on Wednesday morning.

"The police have already arrested two persons and are investigating the matter. I can assure that such incidents won't occur in future again. There will be a thick security cover when the Australian team leaves for Hyderabad," he added.

"The stone thrown at the Aussie team bus shows us in bad light; let's all act more responsibly. A vast majority of us are capable of that," wrote Ashwin on Twitter.

It proved to be a nightmare for journalists, who struggled without basic facilities like Internet to cover the match but it fell on deaf ears of the ACA.

There was no Internet connectivity in the media box, which had only one television set to cater to about 250 jouralists, while the washroom ran out of power.

However, what worked inside the media box was the public address system that played out songs and "welcomed" the spectators with loud announcements till it was forced to be disconnected.

In the wake of the attack, Assam Chief Minister Sarbananda Sonowal on Wednesday directed state's Chief Secretary VK Pipersenia to initiate an inquiry into the matter.

"It was an act to tarnish Guwahati's reputation as an emerging sports hub. We strongly condemn it and investigation is on. It was done to defame Assam and derail the state's journey towards excellence. We'll foil the evil design with the support of the people of Assam," Sonowal said in a statement.

"Sports Minister, Chief Secretary and DGP were directed to meet the Australian players and convey state government concern and the immediate measures taken after the incident," the Assam Chief Minister further said.

Following the direction of the chief minister, a team comprising state Sports Minister Naba Kumar Doley, chief secretary and DGP called on the Australian players to express the state government's concern and informed the measures taken after the incident.

India and Australia will now head to Hyderabad to lock horns in the series-decider T20I match of the three-match series, which is to be played on October 13 at the Rajiv Gandhi International Stadium.