Australia, abandoning conventional wisdom by opening their bowling attack with a spinner, seized control of the second Test against West Indies at Queen's Park Oval in Trinidad on Monday.

The tourists, already 1-0 up in the three-match series, ripped through the West Indian top-order in the final session of the second day to reduce the home side to 49 for three in reply to Australia's first innings total of 311. 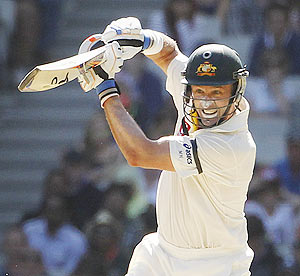 With the pitch already turning sharply, Australian captain Michael Clarke took the unusual step of tossing the new ball to left-arm spinner Michael Beer and he vindicated his skipper's decision with an early wicket.

In his seventh over, Beer trapped Adrian Barath lbw for seven after paceman Ben Hilfenhaus made the initial breakthrough by removing Kraigg Braithwaite lbw for a duck.

James Pattinson, who scored an invaluable 32 in Australia's innings, then chipped in to dismiss Kieran Powell, also lbw, for 19, leaving Darren Bravo (16 not out) and Shivnarine Chanderpaul (one not out) to battle through to stumps.

The late dismissals handed the momentum back to Australia after the visitors had lost their last four wickets for just 14 runs after Mike Hussey scored a resilient 73 to get them past 300 on an increasingly difficult batting pitch.

West Indies paceman Kemar Roach captured the last two wickets in three balls to finish with 5-105 while Shane Shillingford (3-92) and his fellow spinner Narsingh Deonarine (2-32) split the other five.

Australia resumed on 208-5 and did well to add another 103 to their total after West Indies made an early breakthrough when they dismissed Australian wicketkeeper Matthew Wade in the second over of the day.

West Indies might have had another quick wicket when Hussey advanced down the pitch and was beaten by Shillingford, playing his first Test since 2010.

But wicketkeeper Carlton Baugh, who dropped Hussey when he was on five on day one, fumbled the ball, allowing the lefthander to scramble back inside his crease before the bails were removed and he made them pay.

Hussey, who was on 47 at the time, posted his highest Test score in the Caribbean and shared an 89-run partnership with Pattinson.

Hussey batted cautiously for most of his innings, which was interrupted by almost two hours because of rain, but showed some occasional flashes of aggression.

He lofted Shillingford over the fence for six but threw his wicket away on 73 when he tamely pushed a ball from Deonarine straight to Braithwaite at extra cover, triggering the late collapse.

Pattinson departed in the next over then Roach polished off the tail when he was reintroduced into the attack, bowling Hilfenhaus then trapping Beer as the ball ominously started to skid through.

B Hilfenhaus b Roach 5

A Barath lbw b Beer 7

S Chanderpaul not out 1