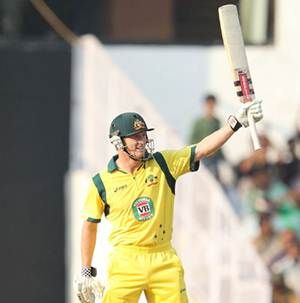 “I am extremely honoured and excited to lead Kings XI Punjab this season. I would like to thank the franchisee for having faith in me and entrusting me this opportunity.

"I hope to live up to the expectations of the franchise and its fans and I am looking forward to playing with some of the finest cricketers in the team,” said Australia’s T20 team captain Bailey, who was bought by Kings XI franchise in this year’s auction at a price tag of Rs 3.25 crore.

Bailey is the third overseas player to be named captain of a team this IPL season, the others being Shane Watson, who will lead Rajasthan Royals, and Kevin Pietersen, who will lead Delhi Daredevils.

Kings XI coach Sanjay Bangar said Bailey has proved his mettle as a captain by leading the Australian team to several victories in the past.

“He was a popular choice at the franchise and we are hopeful that his experience and guidance will lead the team to great success this season,” he said.

Bailey had previously played for Chennai Super Kings for three years, from the 2009 season, before being released in 2012.

Their costliest purchase in last month's auction was Australia pacer Mitchell Johnson, for Rs 6.5 crore, while Glenn Maxwell was bought for Rs 6 crore, and Virender Sehwag for Rs 3.2 crore.