'I certainly won't be looking at it as revenge. We are certainly a different side from what they played against here last year, and there's more at stake -- there's World Test Championship points at stake.' 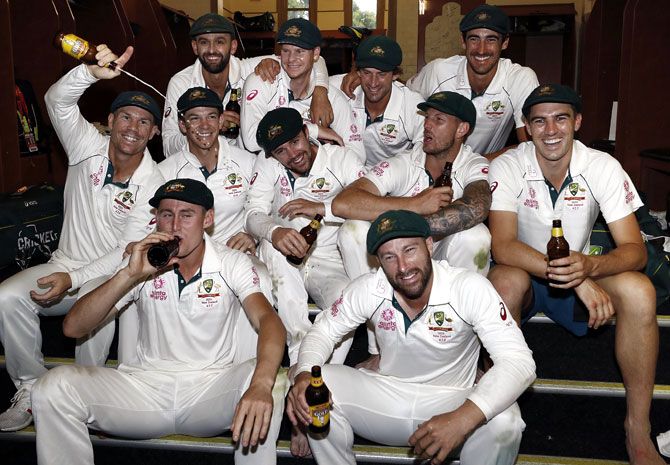 Their confidence soaring high after five Test wins in a row, Australia skipper Time Paine says they can't wait to host India for a "mouth-watering" series later this year but revenge is certainly not on their minds.

Australia had suffered their first ever Test series against India at home in the summer of 2018-19 when they missed prolific batsmen Steve Smith and David Warner, who were serving bans following a ball-tampering scandal that shook world cricket.

Australia has taken long strides since then with young batsmen rising to the occasion, their fast bowlers doing much better and the Smith-Warner pair getting back to the fold.

As a result, Australia humbled Pakistan in both the Tests inside four days and scored dominant victories over the Kiwis.

A sense of confidence has replaced desperation as Paine spoke of India's tour which is still a year away.

"If we go to Bangladesh and play well and get some wins over there, then we come back to Australia playing India, and that's a pretty mouth-watering series for players and for fans," Paine said.

"It's hard not to be looking at that, and we have got some people at Cricket Australia already looking ahead to that series. But for the main playing group our next goal is Bangladesh, and we certainly can't take that lightly."

Australia's struggle against India in the last summer reflected in their batting as the highest individual score was opener Marcus Harris's 79 in the final Test in Sydney but this season they had a triple-century (Warner), a double-century (Marnus Labuschagne) and at least one individual hundred in every Test.

Paine said they are not looking at revenge but something bigger is at stake.

"I certainly won't be looking at it as revenge. We are certainly a different side from what they played against here last year, and there's more at stake -- there's World Test Championship points at stake.

"Both of the two teams, Australia and India, are eyeing off that final so every point is going to be critical. If we can continue our upward trend that we have shown in the last 12 months, then you are potentially looking at the top couple of teams that are in the top two or three, in the world. It's going to be an awesome series."

Paine acknowledged that India not more a side which heavily relies on their spinners, rather their pacers are now as good theirs and the likes of Jasprit Bumrah, Mohammed Shami, Ishant Sharma will be followed keenly.

The rise of Marcus Labuschagne is a testimony to that.

"We spoke a lot last year about there being a silver lining from what's happened (in South Africa). The guys who got opportunities to play Test cricket last year who probably wouldn't have (otherwise), one of them is man of the series (Labuschagne) … and Travis Head is still averaging 45 or more in Test cricket.

"They wouldn't have otherwise got the opportunity they had last year."